Mammoth Lakes Recreation (MLR) is pleased to announce and invite members of the community to attend the annual Veterans Day event scheduled for Wednesday, November 11, 2015. The event will begin at 9am at the Mammoth Lakes Fire Department, Station #1, on Main Street in Mammoth Lakes. 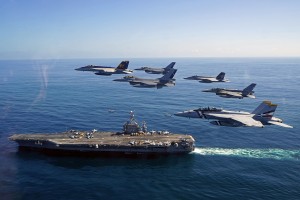 This photo was taken a couple weeks ago in the Pacific Ocean off of Chile. The Carrier is the George Washington. Lt. David Gardner, son of Ted and Bishop Mayor Pat Gardner, was in the helicopter when the photo was taken, as an Operations Officer. ### PACIFIC OCEAN (Oct. 19, 2015) U.S. Naval aircraft and aircraft from the Chilean Air Force participate in a fly-by adjacent to aircraft carrier USS George Washington (CVN 73). UNITAS 2015, the U.S. Navy’s longest running annual multinational maritime exercise, is part of the Southern Seas deployment planned by U.S. Naval Forces Southern Command/U.S. 4th Fleet. This 56th iteration of UNITAS is conducted in two phases: UNITAS Pacific, hosted by Chile, Oct. 13-24, 2015 and UNITAS Atlantic, hosted by Brazil scheduled for November. (U.S. Navy photo by Lt. j.g. David Babka/Released)

The purpose of Veterans Day is to celebrate the soldiers that are still alive and served in the armed forces at any time during peace or war.

World War I, known at the time as “The Great War,” officially ended when the Treaty of Versailles was signed on June 28, 1919, in the Palace of Versailles outside the town of Versailles, France. However, fighting ceased seven months earlier when an armistice or temporary cessation of hostilities, between the Allied nations and Germany went into effect on the eleventh hour of the eleventh day of the eleventh month. For that reason, November 11, 1918, is generally regarded as the end of “the war to end all wars.”

The observance of Veterans Day on November 11 not only preserves the historical significance of the date, but also helps focus attention on the important purpose of Veterans Day: A celebration to honor America’s veterans for their patriotism, love of country, and willingness to serve and sacrifice for the common good. 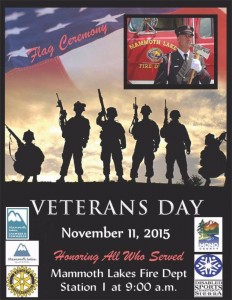 Please contact [email protected]mammothlakesrecreation.org for more information about the event.

Wednesday November 11, 2015
11:00 AM
Mt. Whitney Cemetery
Lunch will be served at the Post following the service
481 South Main Street

Bishop VFW Post 8988 memorial services at the Pioneer Cemetery, 11 am. Ladies Auxiliary will host a reception with refreshments at the Post after service.

Activities will begin at 8:00am at the Big Pine Cemetery where Americans flags will be placed on eachVeteran’s headstone, followed by placing flags on Veteran’s headstones at the Woodman Cemetery.  Volunteers are asked to come and participate in placing the flags to honor our Veterans.

The public is invited to attend the service, which will begin at 11:00am at the Big Pine VeteransMemorial located at the intersection of Hwy 395 and 168.  This service will commemorate the signing of the Armistice at the 11th hour of the 11th day of the 11th month.

Immediately following the service, lunch will be served at the Big Pine Town Hall, courtesy of the BigPine American Legion and Auxiliary, for Veterans, their families, and guests.

Thank You for your service High Water!

I am a Veteran, and a Veteran is someone, who at one point in their life, wrote a blank check payable to the United States of America for an amount up to, and including, their life. Regardless of personal political views. It is an honor to serve one’s country, and… Read more »