The heavy snow has taken a toll on electricity and phone service in the Eastern Sierra. 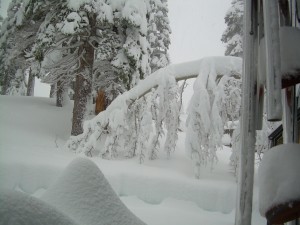 Mike Page of Verizon said that because of the intense storm activity literally all over the state all utilities are slammed with repair work. Page said right now up to a thousand phone services in the Eastern Sierra are out.

Page said he spoke with the area manager who said that Verizon has no additional people to call on for repairs. Currently, hundreds of thousands of people are out of phone service in California. Page said Verizon will try to get people on top of repairs as soon as possible.

Tuesday, people in Independence could not use their land line phones. Verizon spokesmen told them no repairs could be done until January 3rd. Residents were upset. We called Mike Page who said Verizon employees will work extended over time through the holidays with only Christmas off. He said that crews will focus on emergency phones first – law enforcement, hospitals, fire departments.

As we have reported, Edison has a similar problem. Heavy snow has taken down trees and power lines. The latest report this morning came from Mammoth Post Office where the power went down. Employees wore lights on their heads to do their work. Postmaster Gary Fultz said that customers could pick up packages and mail but could not send packages out since their equipment is all down.

We work to provide daily news to all of the Eastern Sierra, in the tradition of Eastern Sierra News Service and the Sierra Wave. We bring you daily happenings, local politics, crime, government dealings and fun stuff. Please contact us.
View all posts by News Staff →
Record snowfall causes power troubles
Aspendell pounded with 80 inches of snow