On the morning of Wednesday, August 23, 2017, Mono County employees discovered graffiti on the exterior wall of the bathrooms at the Bridgeport Ballfields. The vandalism covered an entire wall and had been committed after 4:30 pm on the day prior. 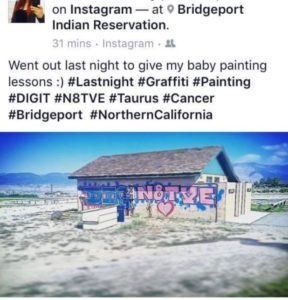 At nearly the same time as the vandalism was reported, the Mono County Sheriff’s Office became aware of a social media post, including a photo, claiming responsibility for the graffiti.

Deputies conducted a follow-up investigation to the last known residence of the social media poster. Two people fled out a back window and ran into the sagebrush. Responding law enforcement quickly established a perimeter, and the two people who fled were located hiding in the field. One of the people detained was Lorena Holdaway, 21 years old, of Bridgeport.

Holdaway is the person who posted about the vandalism on social media. The other person could not be connected to the vandalism. Holdaway was booked into the Mono County Jail on one count of Felony Vandalism and an unrelated Felony Warrant issued out of Ventura County.

Trouble….Bridgeport people love and respect the town they live in….they don’t want their town turned into a Los Angeles-type area where gang graffiti is an accepted sight….where do you draw the line ?…..outhouses O.K. to paint up and cause an eyesore….other areas up there not O.K. to be doing to…my… Read more »

They only wrote Native Love on a outhouse . Get over it!

It is not your backyard, it is ours…and we won’t get over it….

Sorry to hear about your fancy outhouse and bored kids!

Not Okay
Reply to  Trouble

Trouble you are everything that is wrong with the Rez and the current Native Culture.

I think it looks better. Leave those kids alone!

Reading their “intragram post ” along with the photo,gotta wonder about that message…sounds kinda like a guy taking “his girl ” out to teach her some art lessons…but as the story unfolded,and the suspects ran off ,and later caught,how much you wanta bet her,the “art student” being arrested,maybe because of… Read more »

“stupid is as stupid does.”

How STUPID can you possibly get !!!!…vandalizing with graffiti,taking photos on your no doubt smart-phone,and post on facebook or twitter WHILE THEY WERE STILL THERE AT THE CRIME SCENE,and tell the world …and Law Enforcement…all about what you’ve just done..are you kidding me !!..gosh,gotta believe this generation is no doubt… Read more »

Lower, for a guy that brags about how the community helped you out when you first arrived here, I think you should should lighten up on the hard love you’ve been passing out lately!

Hey Trouble…When I first got here to the Owens Valley,no handouts wanted or given by anyone….asked for and got work …..and ran with that,doing well now 17 years later….and when I did arrive in Lone Pine,big part was staying out of trouble and / or doing stupid things,knowing if I… Read more »

Maybe I shouldn’t have said that. Sorry, but please keep in mind that Native Americans do not look at this as graffiti ,but as a form of art and communication.