The Van Dyke Fire has been mapped at 450 acres and is 75% contained.

The fire is in grass and sage fuels and has received measurable moisture. More rain and snow is in the forecast in the next few days. 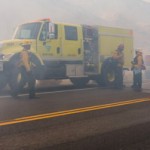 Initial attack response was by local fire departments and the Humboldt-Tioyabe National Forest. Bridgeport and Lee Vining Fire Departments were instrumental during initial attack and helped prevent structure loss.
Highway 395 is opened and all evacuations have been lifted. Additionally, power service has been restored. Verizon cell service remains down at this time.

The SCE power sub-station received damage from both fire and wind from the storm; repair work on the station was completed last night.

The cause of the fire remains under investigation.