By News Staff on February 8, 2019 in General Misc. Stories

Despite the bird name, V-22 Osprey, the official definition of the helicopter/airplane marriage is a tiltrotor military aircraft. Four of them landed at Bishop Airport late last week. The Ospreys and a crew of 40 Marines are here for the next two weeks.
The Ospreys and Marines are regular visitors to the Owens Valley, but watching the birds fly never gets old.

Their mission is to provide support for mountain training at the Corps Mountain Training Center in Pickel Meadows northwest of Bridgeport. The Center doesn’t have the room or facilities to handle the fleet of Ospreys—so the aircraft and crew stay in Bishop.
The Marine Medium Tiltroter Squadron 161 didn’t make it to Pickel Meadows Monday, opting to head east into the Whites instead. With U.S. 395 closed from Mammoth Lakes to south of Bridgeport, nobody was getting into the mountains. 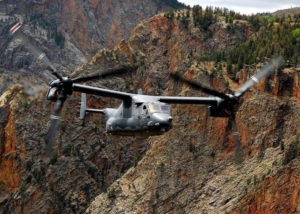 A television news crew from Albuquerque takes a ride on a CV-22 Osprey Aug. 7 and finds themselves in the midst of aerial scenery that is breathtaking, as is the angle of flight during part of the ride. (U.S. Air Force photo/Staff Sgt. Markus Maier)

Few of the details of the training regime were available—it’s a military thing.

The Osprey was developed after the failure of Operation Eagle Claw during the Iran hostage crisis in 1980. What the military needed was a long-range, high-speed, vertical-takeoff aircraft. Bell Helicopter and Boeing Helicopters got the job. Since the Osprey was the first of its kind, it took a while—until 2000 for crew training and finally fielded in 2007.

The aircraft has seen operations over Iraq, Afghanistan, Libya and Kuwait.
During landing and takeoff, the Osprey operates like a helicopter. Once airborne, the proprotors rotate 90-degrees in as little as 12 seconds for horizontal flight with the fuel efficiency and higher speeds of a turboprop aircraft.

I wish to clarify my thoughts which I quickly posted and am unable to edit. I think the Ospreys are fascinating to watch, and I spent a couple of hours in the meadow watching them practice going around in circles and landing. Some of us are sensitive to low frequency… Read more »

We thoroughly enjoyed driving out to our Bishop airport to see the V-22 Ospreys parked. They are amazing. On a second trip I was able to see two land. It is good to know our military has such advanced technology. We were not disturbed by the noise. Keeping us safe

I have to agree with John S! Tonight, it’s after 10:15pm and I still hear them going on out there. It’s nice to have them visit, but don’t stay too long, hear?

Actually, it does get old. Trying to sleep Thursday night with the constant sound of helicopters hovering around our neighborhood. Maybe they should move on to a place like Tonopah or the Tonopah test site where this type of noise is expected. If I wanted to move next to a… Read more »