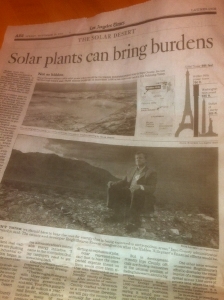 Inyo CAO Kevin Carunchio has made countless trips to Sacramento to defend Inyo’s position in the solar stand-off.

More big utility firms here to profit from Eastern Sierra resources without a benefit to us?  That’s how Inyo officials have described the latest proposal by BrightSource Energy to develop a $2.7 billion solar power plant in the Death Valley area.  The Los Angeles Times picked up on the story and found two other counties with similar gripes. As the Times story says, “Counties that invited the projects expected jobs and taxes not a drain on their budgets.”

Inyo County Administrator Kevin Carunchio, pictured in the Times article, said, “We don’t think we should have to bear the cost for energy that is being exported to metropolitan areas.”  Carunchio has reported locally that the State Energy Commission has all the regulatory power over big solar projects.  He said Inyo has found that BrightSource will get tax breaks and not pay their fair share of taxes.  He has said that their contributions will not cover the high cost of public services required by their project.  In short, Inyo would lose money and gain only a handful of local jobs.  Inyo and BrightSource, however, are in negotiations.

The LA Times article says at first it looked like the solar project would give Inyo County property taxes that would boost the general fund by 17%.  The story reported that an economic consultant hired by Inyo found that property tax revenue would amount to a fraction of the customary amount because parts of the plant qualify for a solar tax exclusion.  The story also says that “Fewer than ten local workers would land permanent positions and just 5% of the construction jobs would be filled by county residents.”  Plus, as Carunchio has told Sierra Wave Media, workers are more likely to spend their money in Nevada which is closer than Inyo towns.

The Times also says that the solar project would cost Inyo $11 million to $12 million during the 30-month construction phase on a road upgrade and more.  Inyo officials have said that once the project is up and running, it would cost taxpayers about $2 million per year in more law enforcement and other services.

The Times story says there are similar stories in Riverside and San Bernardino Counties.  In addition to serious money concerns, counties are concerned about visual impacts.  At the same time, Governor Brown continues to push hard for development of renewable energy.  Counties faced with solar plants say fine, but give us a fair share of the money.

Until the monopoly the utility companies hold on our water and power supplies is reversed, our bills will just go up no matter how many wind mills they toss up. Do you really believe we are going to see all these polluting power plants shut down ?

Did you know Inyo county has a moratorium on any sort of wind generation? Seems .. what boils down to, is aesthetics. People were complaining about the unsightliness of the wind generators along the Owens Valley’s view shed. Really? .. when we need to develope alternative power supplies?

And what exactly are their complaints — given that there are no wind towers in the Owens Valley. What are they basing their complaints on other than their distorted imagination. These kind of complainers seem willing to exercise their imaginations on the supposed visual polluttion while ignoring the real pollution… Read more »

Projects like this are not as simple to execute as some of you are implying. There are a matrix of laws that need to be navigated beyond just the local issues. Politicians generally do not have anywhere near the technical or legal experience needed to handle this type of project.… Read more »

Projects like these are at least partially funded by government sources. And they are good for the whole country. In the long run, these solar thermal electric plants will benefit us all.

Wind farms along the Sierra crest would benefit us all too, but that doesn’t mean it’s a good idea. The LA Times article mentioned what I thought were some legitimate concerns from Riverside county about the costs being a bit more than they were led to believe. It’s behind a… Read more »

Get Real
Reply to  johnjcampnfish

Wind Farms would not survive on the Sierra Crest. Also, wind energy is not profitable above 7,000 feet.

You answered my question perfectly Sean. We do need alternative power supplies!

The proposed solar plant in located adjacent the CA -Nevada border near Pharump. Most all community services are provide from Nevada, shops, gas etc.

What Inyo county residents would get jobs out of this? What services is the county committing to provide?

Is this the old Charleston View project property?

I don’t know about Charleston View, but Inyo would have to provide roads and law enforcement for starters.
BK

The Brightsource Ivanpah site is already under contruction. If’s off I-15 near the NV border. The roads are already there. http://goo.gl/maps/E0S3Q There’s no place to live around there except in Nevada around Henderson or Las Vegas. Probably not a lot of people from Inyo are going to be working there.… Read more »

I didn’t know about the one near Pahrump. That would need some road improvements. Hard to see why Inyo should take the whole cost burden given most people who work there will live in NV. A little cooperation would be beneficial to everybody. .

I don’t understand why big government gives taxpayer subsidies to energy companies to rape the desert by placing solar farms in undistrubed areas to then transport the electricity generated to far-flung cities. It seems to me that the better thing to do is to give urban home owners the subsidies… Read more »

Under you logic it is much better to get your energy from a dirty coal burning plant from another state of build more nuke plants. NIMBY right? Out of sight, out of mind.

Actually, “Get Real” your logic is totally flawed…how is “getting your energy from a dirty coal burning plant from another state of build more nuke plants” related to solar panels on the homes that utilize them? I’m talking about getting rid of the middle man (electric companies) from the tax… Read more »

Big Rick .. ask Mono county about the how much the consultant cost them, that recently came up the the glorious new parking plan in their county seat.

I have seen some good business ventures offering jobs .. get carried off by the companies proposing to bring their business to the area .. only to throw their hands up in the air over so much obstacles put in front of them by the county, and walk away. And… Read more »

Solar firms to counties … show us some partnership without raping us.

This is a total shakedown by Inyo County. The Sheriff is really using “Fuzzy Math” if he thinks that he needs to hire more than ten deputies for a bunch of solar panels. This reminds me of how the Mafia controlled dock unions operate. “Youse gots to pay to work… Read more »

I wonder how much the “Economic Consultant” hired by Inyo County.cost. Don’t they have people that are ALREADY on the county payroll that could figure this out ?