By News Staff on May 27, 2015 in General Misc. Stories, Government Agencies/Utilities, Public Event 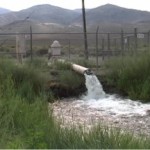 LADWP’s motion to eliminate water supplies to the waterfowl ponds and adjacent 100-acre native pastureland west of U.S. 6 north of Bishop this runoff year was approved and will be passed on to next week’s Standing Committee meeting. However, the native pasture southeast of Laws will continue to be irrigated.

The Standing Committee meeting scheduled for Thursday, June 4, in Independence, will determine just how much water will be made available for irrigation to Owens Valley ranches during the fourth and worst year of drought.

According to Aqueduct Manager Jim Yannotta, LADWP needed clarification on the McNally Pond water reduction motion made at the May 7 Standing Committee session. Because the two wells providing replacement water for the project “are not currently operational,” Yannotta stated, “and the Technical Group has not agreed to exempt or turn on well W249, LADWP is not diverting water into McNally Canals under the current year’s extremely low runoff as part of its surface water management practices.”

Following the agendized items, Daris Moxley, Gary Gilbert and Sally Manning raised issues of LTWA violations, specifically Type 3 vegetation parcels irrigated in 1981 that have not received water allotments. Harrington explained that the Water Department does not have the data to track each LADWP lease. “We don’t have the data to prove a violation,” he said. According to Yannotta, if no surface water is available, water can’t always be diverted to leases due to California Department of Fish and Wildlife requirements for fish.

Neither explanation eased the frustration expressed by Moxley, Gilbert and Manning.

Los Angeles Department of Water and Power made a strong visual statement that no water, not currently in Haiwee Reservoir, is headed to Los Angeles. The department built a temporary dam at the Cartago Spillgate, featured in Sunday’s Los Angeles Times. In addition, another dam is planned just below the Lubken Spillgate near Lone Pine to specifically supply water to ranches and Enhancement Mitigation projects.

Inyo County Water Department Director Bob Harrington mentioned the dam at last Tuesday’s Board of Supervisors meeting and LADWP spokesperson Amanda Parsons confirmed the plan. The dam would go in in the “middle of the summer when Owens Lake is not taking all the Lower Owens River Project pump-back water,” she said.

The Lubken Spillgate is a two-way conveyance, channeling water to the lake when needed for dust mitigation. “If the water is not being used by the lake, then the water at the LORP pump-back station goes up the pipe and back into the Aqueduct,” Parsons said. The aqueduct dam below the spillgate will back up the water in the aqueduct far enough to get to the ranches and E/M projects in Lone Pine.

How does this affect people who are on a well system, outside the main city of Lone Pine? Is the CHP really being placed in service of water police?

why does Crystal Geyser in Olancha get a pass on water? they are no even an American company. The fields across from the Ranch House café are flooded with water, makes you really wonder about fairness.

“Los Angeles Department of Water and Power made a strong visual statement that no water, not currently in Haiwee Reservoir, is headed to Los Angeles.” BFD! they loaded Haiwee full with the early winter run-off this year. They recognized that the run-off period this year was going to be atypical… Read more »

Soon the day will come when CHP is “issuing Tickets” for unauthorized garden hose use. then the planting/ growing of illegal vegetable gardens that steal profits from ” Monsanto” Corporation and all the makers of Diabetes and Kidney Dialysis treatment Drug makers, Lets don’t forget that Healthy Americans Is Bad… Read more »

badfinger…..I’m maybe wondering,if the CHP gives out the tickets for “unauthorized use of a garden hose”,what if you happen to be doing it after consuming a few beers ?….maybe a “WWI”…….watering while intoxicated….or maybe the lower charge of a “wet reckless”…

Badfinger39- that could be the most useful thing CHP has ever done around here. Great idea!

Replying to my own post,the water company told me today here in Lone Pine,watering days are going to be Wednesday and Saturday…unlimited time amount….so instead of 10 minutes a day 5 days a week,the timer will set 20 minutes a day twice a week….and then the hose and nozzle on… Read more »

Excellent update and information . The report on the Aqueduct operations is especially informative and appreciated . Thanks once again Sierra Wave