By News Staff on August 20, 2015 in Government Agencies/Utilities

(Note: There were errors in the new Inyo Courthouse article: The approving body for the site was the State Public Works Board whose meeting was Monday, August 17; the modular in independence will not have to wait for the completion of the new courthouse in 2022 and should be on-site and functioning within “a couple of years,” and the staff analysis transposed issues with the two alternate sites. The City Bishop withdrew the site behind City Hall and there were timeline issues with the MacIver site.

We regret the errors.)

Here is an updated story:

The State Public Works Board approved the selection of a parcel at the corner of Wye Road and U.S. Hwy. 6, identified as “the Joseph site” for the new Inyo County Courthouse at its August 17 meeting in Sacramento. 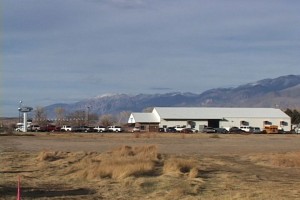 The site faces one more hurdle: negotiations with the site’s owner which will also need approval by the Board, according to Teresa Ruano, supervising communications specialist for the Judicial Council of California. The facility will be built on one acre of the 5.47-acre parcel, just south of the Ford dealership.

County court facilities in Bishop City Hall and the Historic Independence Courthouse will “be vacated” according to the California Courts website. Court functions in Independence will eventually be moved to a “proposed new modular courthouse” adjacent to the County Jail south of Independence.

Since the passage of the Trial Court Facilities Act of 2002, responsibility for county courthouses moved from the counties to the State of California, specifically the Judicial Council. The list of issues connected with both current court facilities is long and renovation of facilities not owned by the State is not do-able. So, Indy gets a modular.

As the center of the county’s population, Bishop was selected as the location of the new courthouse nearly four years ago with the focus on city-owned land behind City Hall and Los Angeles Department of Water and Power land at the corner of Spruce and MacIver streets. According to Public Works Board staff analysis, both sites “were pursued but experienced difficulties in acquiring.” The City withdrew the MacIver site and LADWP site experienced “barriers that would delay project timelines by up to two years.”

A Phase 1 Environmental Site Assessment turned up underground storage tanks on adjoining and nearby properties, noting impacts on shallow groundwater. A Phase II assessment to determine “whether or not these recognized environmental conditions are an issue,” will be conducted, according to the staff analysis.

This is such a wasted opportunity for improving Bishop. Our community leaders and planners should be ashamed.

Super. $24 million of public funds for a building no one ever really wants to go to, proposed for a location no one really likes. As others have noted, a new courthouse facility in central Bishop would be as the tide, synergistically raising many commercial boats in the vicinity. It… Read more »

Where would you propose as a better location? Are there any similar sized chunks of land available in the commercial center of town?

Well, there was the parking lot behind the courthouse. There was also the vacant K-Mart. There are a ton of underutilized utility laydown yards (isn’t SCE moving? …also to the middle of nowhere outside of town?) and empty parking lots across from City Hall on the South Side of Line… Read more »

@FV, I don’t have a dog in this fight. I was responding to a seven paragraph post that was heavy on criticism and very short on solutions or ideas. And my questions were genuine. Are you aware of the status of any of the locations you’ve listed? And if they’re… Read more »

@Charles No worries. I prefer it when people ask hard questions. To be perfectly forthcoming, I’m not sure of the particulars of those sites, except to say that there are options, and there were better options that the Court had considered very seriously, some of which were declined by the… Read more »

I agree with using the old Kmart building, lots of parking and even next to the probation office. Might as well use that wasted space for something.

yes, doesn’t the State Court system have the power of eminent domain? The ‘taking’ (with compensation of course) of a mostly empty property would seem non-controversial. I’d love to see the courthouse right there, on already developed property, nearer to the center of town.