After finding out why so many  local  residents, visitors, local businesses, government offices, and others lost their mobile phone and Internet outage on, first, Tuesday, August 25th (See UPDATE Aug. 27, 2020: Explanation August 25the Outage…), only for it to happen again a second time, two days later, Sierra Wave went looking for the cause for  the second outage on Thursday, August 27.

Outages hurt businesses. Some businesses have to close unless they can do cash-transactions or are willing to accept bank checks. You cannot use an ATM as it is linked to the Internet. As important, many people rely on their computers to work and need to be online to do so. Several people told Sierra Wave that they had to leave work and go home, where in many instances, they could not use their phones or Internet because service was out there as well.

This biggest concern of a cell service and Internet outage has to do with emergency response services. Emergency 9-1-1 calls cannot get through to dispatchers for  help, whether it’s the police services, the fire department or an ambulance. The delay in receiving help may  literally boil down to life or death in some situations.

The first outage on Tuesday last week was caused by Caltrans crew digging a hole for some posts down in Inyokern, where they inadvertently severed a fiber-optic line. The incident of Thursday turned out to be very similar, except that this time it was a municipal crew in Ridgecrest, digging a ditch, who severed Frontier Communications’ fiber-optic line.

This was another contractor that damaged a fiber optic cable. Here are details. Will appreciate you including the Call 811 reminder to any party that is conducting excavation activity near buried lines. Thank you.

Sierra Wave thanks Mr. Mendoza. He has been very cooperative in investigating and then answering our questions about these outages. 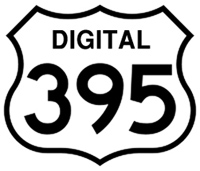 Were communities and local officials sold “a bill of goods?”

The outages do raise some questions about the Digital 395 Project, that was sold as something that would prevent what happened last Tuesday and Thursday. There is supposed to be a redundancy built into the system so that when the fiber-optic cable is damaged, it can be rerouted without loss of service. That clearly is not happening and our local officials should be looking into why this is happening and what can be done about it.

Another concern is, why can’t the service providers at minimum alert local news media, especially radio stations, so that news of the outage can be reported? We are already dealing with a pandemic, wildfires, poor air quality, businesses shut down, and coping with a lot  of stress as a result. Our communities should not have to be worrying about mobile and Internet services going out as well.

To say Digital 395 provided no benefits for the region is a false statement. Digital 395 combined w/ Race Communications, who secured separate funding from Digital 395, connected the majority of the unincorporated communities in Mono County to Digital 395 at no cost to the homeowner. The internet service w/… Read more »

Nolan, you are absolutely correct. I live in the tri-valleys and have had Race for 2 years now. It was installed for free and I was given advanced notice when maintenance outage is needed. It is nice to find that the tri-valley area has better service than the 395 corridor.

Thomas And your right…..no true “down time” Kinda sad. The only time I’m concerned about not doing the cell phone-smart phone thing is when I’m driving somewhere on the highway and might break down and needing a tow,either a long walk into a town with the Dogs or relying on… Read more »

David, I share your sentiments, but then a cell phone call jolts me back to the reality of life in a complex society. I used to be amazed at how quickly, 24/7, I could reach the Captain by cell phone when I wanted to discuss a case. Very useful, I… Read more »

For us old people,what amazes me is how on earth did we all survive without this technical garbage for so many years..wait,I know….we all did fine without a smart phone sewed to our hands and/or ears. Speaking for myself,all I’ve got is an old Windows 7 laptop,and still have never… Read more »

You can convert your landline number to a cell phone number to prevent this problem (unless cell towers go out, which is rarer) by using: https://communityphone.org/pages/landline-transfer

These latest outages took out the cellphone towers. Apparently, the fiber optic cable connects to them, although we are not exactly sure how that works…or in this instance, doesn’t.

You are absolutely correct Tourbillon.

It was and continues to be a monumental and expensive bait-and-switch foisted on us by our elected “leaders.”

For details, please see my comment on this topic posted last week.

Other than expedited processing by Govt. agencies (for permission to encroach on public land and env. approvals), how was digital 395 orchestrated by our elected leaders? I recall it as a private endeavor, by a private entity.

Thank you for your question sugarmags. In response: As far as the manipulative process by which Praxis got local governments to support and approve Digital 395, please see my comment posted last week on this topic. As far as substance: Praxis, as you correctly note, is/was a private, for-profit company.… Read more »

P.S. For the record, I went to the meeting of the California Public Utilities Commission (PUC) in San Francisco to lodge my objection to the PUC – the lead agency under CEQA – approving the construction of Digital 395 without it first preparing an environmental impact report (EIR). Among other… Read more »

These represent only two of dozens of recent outrages that are well known to techs in the area. Digital 395 is simply not what it was cracked up to be

Companies and utilities that fail to have underground utilities located and then cause damage should be required to pay hefty fines for their negligence. It is a serious matter. Lives can be lost when 911 is out. It is not just the inconvenience or lost revenue we are talking bu… Read more »

How are you going to alert anyone if that service is down? No one listens to the radio anymore!

You’d be surprised. Especially when the Internet goes down and you cannot listen on your mobile device, people actually still have radios at home and in their vehicles. That’s like the saying about newspapers, “no one reads the newspaper anymore,” but the truth is, some people, especially discerning readers and… Read more »

The problem with “redundancy” is that it is very possible all the redundant fiber runs either in the same cable, or a cable laid next to it. One backhoe may sever all your built-in redundant paths. In theory, every node and every carrier would have multiple cable lines coming in… Read more »

You get what you pay for, say no more.