By News Staff on August 8, 2017 in Law Enforcement 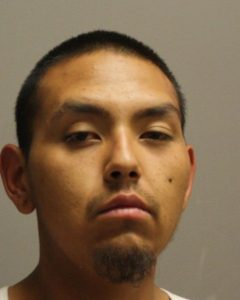 Davis was located due to an anonymous tip received by the Sheriff’s Office.

Allen “Ziggy” Stone is still outstanding – there is a $500 award authorized for whoever can provide information that leads to his apprehension.

The Inyo County Sheriff’s Office is asking for the public’s assistance in locating two individuals connected with two separate assaults that took place in Bishop on Tuesday August 1st. 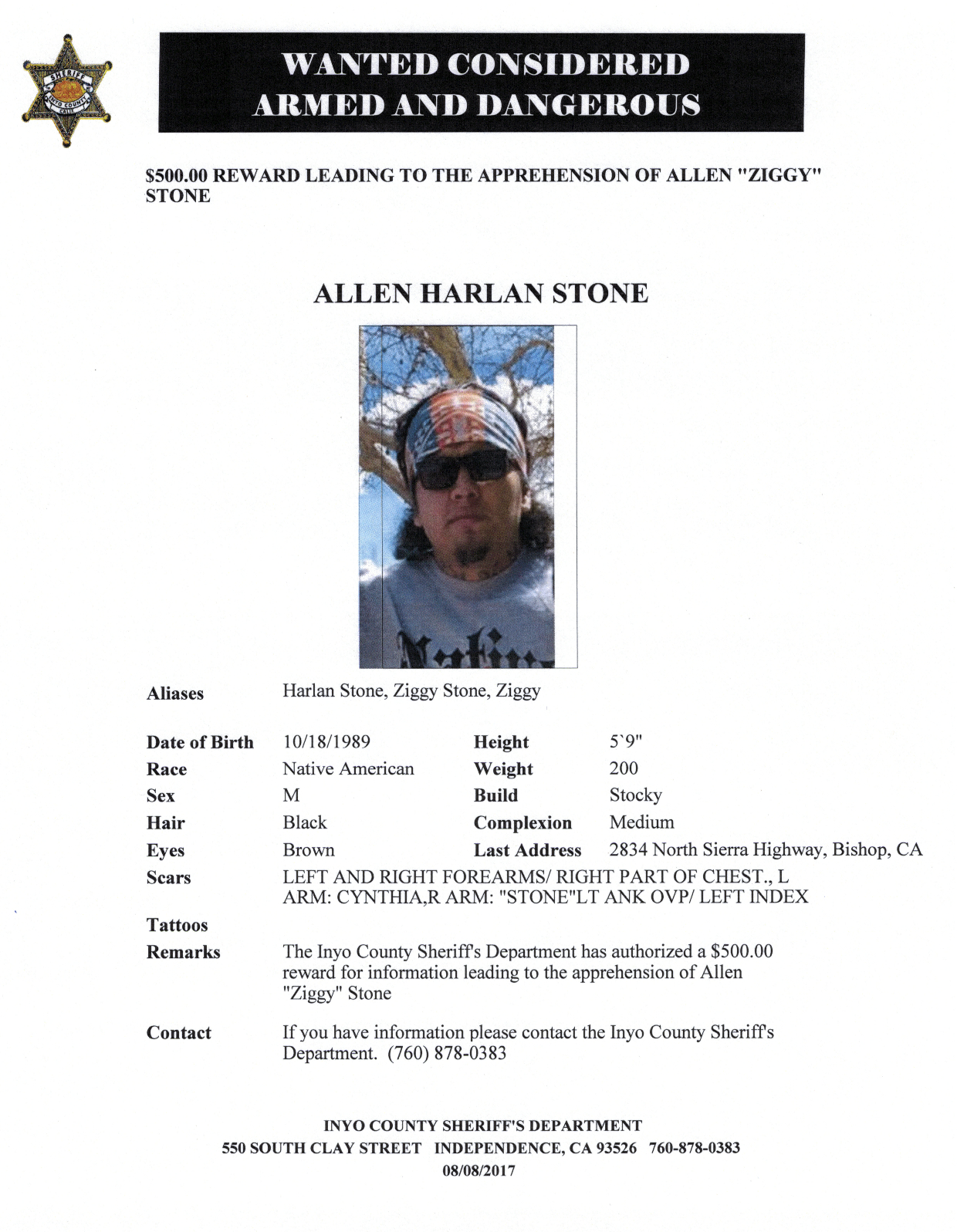 At approximately 4:00pm on August 1st Inyo County Sheriff’s Dispatch received a report of a physical altercation and associated injury at a local business in Bishop on North Sierra Highway. Deputies responded and located an adult male with moderate injuries that were sustained as a result of being assaulted. The victim was transported to Northern Inyo Hospital for treatment.

Around the same time as the first assault, Inyo County Sheriff’s Dispatch received a report of a robbery and second assault on North Sierra Highway, in the area of Winuba Lane.  Deputies responded to the location and were told by the victim that two males assaulted him and stole his bicycle.

“Trouble ” taking a beating on this post here….but still goes,if I ever do meet you,I’ll still buy you a beer…

Trouble, I think you like to start trouble with your comments , I have read your comments time after time and it seems to me you are more for the people who are committing crimes in this town then you are for our local law enforcement , which is crap!… Read more »

Trouble….I somehow get the idea these 24 and 27 year old “kids” maybe do indulge in drugs now and then,but the charges against them is assault and theft…therefore,LE’s promise to protect and serve,maybe what they’d be doing if they got these two off the streets with their violent behavior towards… Read more »

Say what you want, but I still believe our governments declared war on drugs has been used to justify a war on our own people. Police are supposed to serve and protect. Not put bounties people’s heads. Shouldn’t it be the DA office that labels these “kids” as armed and… Read more »

@Trouble, Based on the info provided, they are wanted for assault. So I don’t see how your “war on drugs” comment is even applies. And the fact that they’ve already assaulted people certainly qualifies them as dangerous. Just curious, at what point do expect our citizens to be held accountable… Read more »

Chanting ‘blood and soil!’ white nationalists with torches march on University of Virginia, america Is going into Meltdown lol

Watch what you wish for. America feeds you.

I have personally been the victim of a drunk hit and run. Left in the middle of the street in the night while it was raining. Literally left to get hit again and probably die. The driver was caught and I was saved. Still to this day, even with life… Read more »

Oh , you mean the Same Donald Trump that you told us had no possible chance of ever getting elected PRESIDENT . Change your Nickname to LOW – IQ .

INYOFACE…I’m only glad I wasn’t part of this TOTAL embarrassment to the world our Country has become,thanks to the fools that voted for and elected trump to be YOUR president…not mine.

If there’s a purge, I hope it’s gonna be the narrow-minded, racist, hate-mongering extremists like yourself, Tex. The American version of ISIS.

You all talking about death like it’s a joke. You make me sick. Yeah they are adults and yeah they have done something wrong but does that qualify death? I’m not agreeing with what they have done but I am strongly opposing these comments and hope you think twice about… Read more »

Valley Love……thing is,if you happen to be walking ,or riding a bike down the street,and suddenly get assaulted by two grown men,it’s within your legal right to defend yourself….if they happened to suffer a serious consequence ,it would be THEIR own fault and THEIR actions that caused the problem…not the… Read more »

When will they be issuing “Dead or Alive” Rewards?

Does he have to be brought in alive to collect the $500? The article never really clarified.

Wanted posters are still used all the time. Maybe they should be used more because it seems to have worked. Suspect in custody.

Trouble, niether of these adult are under 18. We will see your sweet comments a few years from now after they kill someone!

Trouble…I doubt if you would feel that way if it were you or a family member being (allegedly) assaulted,and property stolen by them two….these two…they aren’t “kids”…..27 and 24 aren’t children growing up and making mistakes…two adults running amuke,and up till now able to get away with it with no… Read more »

Putting rewards out and calling these /our kids armed and dangerous is going to far in my book. This isnt the wild west or east LA folks. Though are poli e believe it is .

Trouble, 27 and 24 year olds who assault people are not kids, they ARE grown men and they are dangerous when armed. It’s men like this who are the cause of consideration for many to obtain a concealed carry permit. You’re right about this not being the wild west or… Read more »