In an update to Arrests Made in Bridgeport Double Homicide posted on Thursday, March 25, the following day, Friday, March 26 found two of the three suspects, 34-year-old Cory Spurlock and his 32 -year-old wife, Orit Oged, appearing before Missoula Justice Court Judge Landee Holloway to hear the charges against them: two counts of murder and conspiracy. The third suspect, 35 year-old Bradley Kohorst, was arrested and detained in Phoenix, Arizona.

The married couple from Missoula are accused of two murders; the murders of William Larsen and his wife, Yesenia Larsen, in Mono County California that allegedly occurred on November 9, 2020. 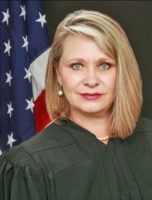 Judge Holloway told the suspects, “You are appearing before the court because the County Attorney’s office has filed a fugitive from justice complaint. They’re alleging that you have been charged in the state of California with the following crimes or offenses and said jurisdiction California penal code 187 sub-section A, homicide, a felony, and also the same for count three is California penal code 182 A1, conspiracy, a felony and said jurisdiction has fled that jurisdiction and it was believed here in the state of Montana.”

On the question for bond for both suspects, Deputy Missoula County Attorney Mac Bloom spoke for the state of Montana saying, “…the state of California is requesting no bail.” He further noted that, “…the court obviously knows that in Montana bail normally must be set, however Montana code…says that all persons shall be bailable before conviction except when death is a possible punishment,” which in this case it is.

Bloom told the court, “Under California law, a murder in the first degree is punishable by death, so the state is authorized in this case to ask for no bail.” It was explained that the two suspects would be retained at the Missoula County detention facilities and turned over to the Missoula County Sheriff’s Office with a “no bail hold.”

Spurlock and Oged will remain in the Missoula County Jail without bond until extradition, which involves a warrant from the Governor of California. Extradition is a process that can take up to several months.

While the suspects could face the death penalty in California depending on the charges filed at trial, the last execution in the state took place in 2006. Governor Gavin Newsom has placed an official moratorium on executions as of March 2019.

Bishop Planning Commission Gets Back into The Weed
What’s all the commotion on the West Side of Independence?
1 Comment
Newest
Oldest Most Voted
Inline Feedbacks
View all comments

I served with both Kohorst and Larsen in Iraq. This is so sad.