INYO COUNTY, CA, MARCH 10, 2021 – On Sunday afternoon, March 7, Inyo County Sheriff’s Dispatch received a SPOT notification from a hiker requesting assistance for her hiking partner who had taken a 40′ tumbling fall on the north ridge of Mt. Tom at approximately 12,000′. The subject was experiencing acute back pain and was unable to move. The reporting party was a Wilderness EMT and both women were experienced hikers who had been on the route before.

With deteriorating conditions and darkness approaching, CHP H-82 out of Apple Valley attempted to extract the subjects or insert Inyo Search and Rescue (SAR) members nearby. High, gusty winds made this impossible. H-82 then attempted to drop overnight gear to the subjects. Unfortunately, both gear drops were unsuccessful due to worsening wind conditions and the subject’s location on a steep, narrow ridge. After the gear drops failed, an Inyo SAR ground team began up the north ridge around 2:00am on Monday, March 8 to attempt to reach the hikers, however conditions turned the field team around after several hours. 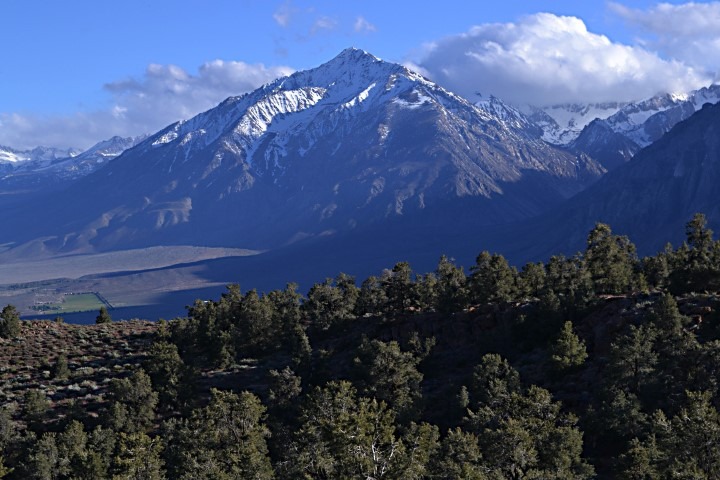 Mt. Tom where two hikers were rescued by multi-agencies working together.

Around 9:00am the Sheriff’s Office heard from the hikers that they had made it through the night, where temperatures were below zero with wind-chill, and both of their husbands had made it to them that morning having hiked through the night to bring supplies. At 11:00am, after several setbacks, an Army National Guard Chinook out of Stockton attempted to insert 12 Inyo SAR members near the party, but the more powerful Chinook was also turned around by the winds.

With a storm forecast arriving Tuesday morning making helicopter extraction even more unlikely, Inyo SAR deployed multiple ground teams up Elderberry Canyon to reach the party and prepare for potentially lowering the patient over 6000′ down Elderberry Canyon. Given the scale of this potential evacuation, a mutual aid callout went to SAR teams across the state. While ground teams hiked, a Naval Air Station (NAS) helicopter from Fallon and another NAS ship from Lemoore made numerous attempts to reach the subject, but gusty winds turned them all back. 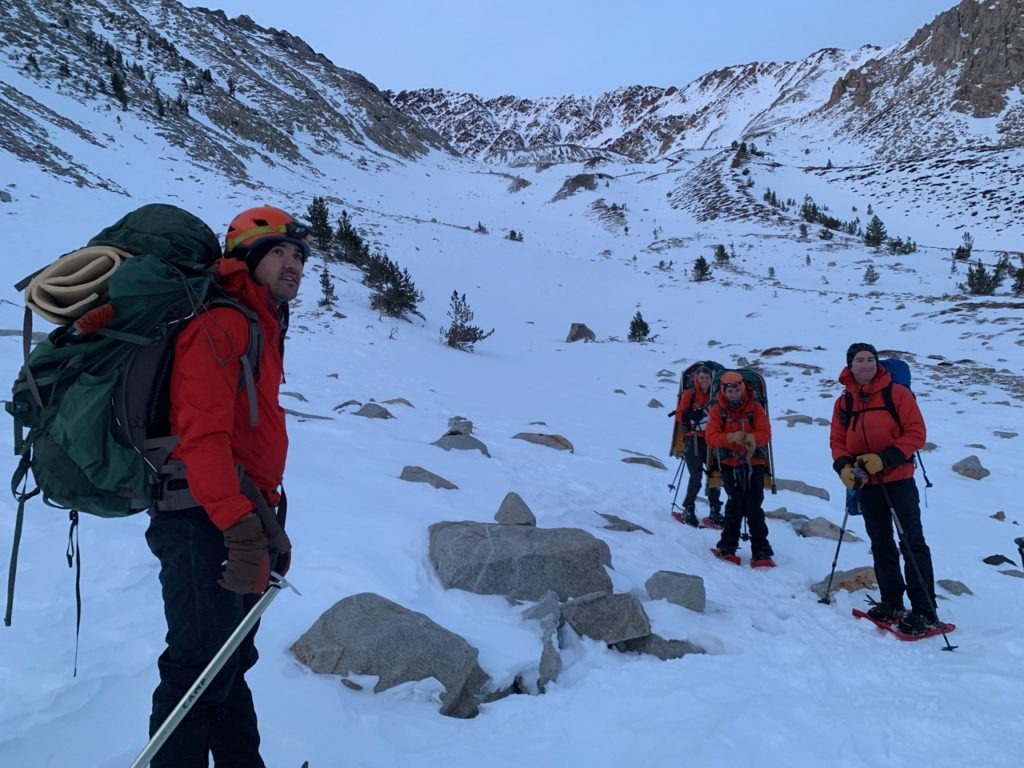 At approximately 10:30pm the first SAR team reached the party and was able to assess the situation better and begin to form an extraction plan for first light. Around 2:15am on Tuesday, March 9, VX-31 out of China Lake was able to take advantage of a lull in the winds and insert a medic near the party.

Both the patient and the reporting party, who had suffered significant frostbite to a foot, were successfully hoisted out by 3:00am and were flown to Antelope Valley for medical care. The SAR team and the husbands of the two hikers descended the headwall of Elderberry Canyon where they met up with dozens of SAR members who had traveled from near and far and hiked through the night to help with what could have been a truly epic extraction.

Most expensive AirBNB ever!

I really hope these two hikers plan on making a SIZABLE DONATION to Inyo SAR.

Where was the common sense button on these two women? Why would you try to climb a snow
covered mountain in the middle of winter in the Eastern Sierra? Then have to call the search and rescue to save your butts and put their lives at stake for your stupidity.

Most of us did things on our twenties that we wouldn’t necessarily do in our forties. Wisdom is gained from experience. I have to wonder if the responses might be different if these mountaineers had been male. In any case I’ve watched a lot of people take their last breath… Read more »

Stupidity? Perhaps re-examine your own background and experience with Sierra peaks in the winter (which is obviously little to none) and re-evaluate what grounds you have to pass judgement on. Even if you were experienced, what value does your outpouring of negative sentiment hold other than to perhaps relieve yourself… Read more »

Narcicists are blind to the risks that their actions may impose on others. These ladies put many peoples lives at risk, including their own husbands, just so they could try to bag a peak. Time for serious self-reflection for them and for our own narcissistic community of extremists.

GB Kinda hard to understand your statement there. Aren’t they putting themselves in danger once they set out on a mission,and especially in inclimate weather like this was ? Thank God for the women’s Husbands for braving that weather and making their way to them that early morning,or this could… Read more »

Sounds dangerous for all involved. Got to wonder about bagging a peak in such crappy conditions. Glad they are alive and glad no one else got hurt or killed trying to extract them.

not sure about people’s reading skills……the women set out in good weather with no storm forecast for 2 days. If not for the fall, they would have been home toasty in bed before the wind was even an issue, let alone the storm. I guess people like reality check feel… Read more »

Hmmm, I have a picture of Mt. Tom from sunset on Sunday night and the clouds show high winds aloft…just saying.

Have been both a mountaineer and a sar member and will say this will change these women’s lives. Their rescue was skill plus luck = miracle. Heard the helos flying in the windstorm in the dark and assumed the worst. Go Team. And best wishes to the two mountaineers.

‘conditions turned the [SAR] field team around,’ yet ‘both of their husbands had made it to them that morning having hiked through the [same] night to bring supplies.’

SAR teams won’t put themselves in danger of death or serious injury because that only complicates the emergency response.