The Inyo National Forest has been aggressively suppressing and monitoring several natural lightning caused wildfires in the past week. Things have settled down and there is no new activity to report on the Kelty and Cow fires.

Fire activity is increasing on the Springs fire, and firefighters are strengthening containment lines by cutting hazardous trees and installing fire hose and portable water tanks around the fire. This will reduce some of the risk associated with responding to wildland fires. Safety of the public, firefighters, and infrastructure is always the top priority.

The lightning caused Pond Lily fire west of Devils Postpile and Mammoth Lakes has been suppressed due to its proximity to the John Muir Trail and is 90% contained and 8 acres in size. The Incident Commander anticipates releasing the smokejumpers assigned to the fire today.

Remaining resources will back haul hose and suppression supplies Friday, with all resources released at end of shift Friday. The fire will be put into patrol status at that time. This will be the last update for this fire.

The lightning caused Springs fire is located near Pilot Springs, south of Highway 120 East and east of the Mono Craters. The fire size increased to 1.5 acres today and is smoldering, creeping and burning with low spread rates in Lodgepole pine and mixed conifer. This fuel type and area historically received natural lightning caused fires every 15 -50 years and relies on fire to regenerate and maintain a healthy, fire
dependent environment.

The lead forest resource advisor for this incident, Jacquie Biedl, states “The
Springs fire has given us the benefit of time to get out in front of the fire in order to identify and protect fire sensitive cultural sites and other natural resources at risk”.

Firefighters will be conducting tactical firing and burnout operations to containment lines and anticipate 25 to 30 acres of growth today. This critical operation will keep the fire from spreading east into much more dense and continuous vegetation and
fuels and allow for a strong anchor point in anticipation of the fires continued growth.

There will be road closures proximate to the fire and forest users are asked to avoid the area to keep firefighters, equipment, and themselves safe. Forest managers are working closely with the Great Basin Unified Air Pollution Control District, Caltrans and adjacent stakeholders to ensure that potential smoke impacts to nearby communities and recreation areas are limited and mitigated to the extent possible.

Expect smoke to be visible along Hwy. 120 east and in and around Mono Lake. Regular updates will be provided on the Springs fire.

Fire in the Eastern Sierra and on the Inyo National Forest is a frequent and essential natural event that ecosystems and wildland urban interface communities rely on to develop resiliency to future potentially catastrophic, unwanted wildfires.  Low intensity lightning caused fires restore and maintain forest health, and biodiversity while creating sustainable recreation opportunities into the future. Every naturally ignited fire is evaluated carefully with public, firefighter, and infrastructure safety as the top priority. 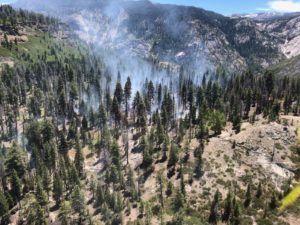 The lightning caused Cow fire is southwest of Fat Cow Meadow within the Golden Trout Wilderness. The fire is about an acre in size and smoldering at an elevation of 9,500 feet in mixed conifer. This area has not seen fire in recorded history. Due to low fire behavior and remoteness, fire personnel have been monitoring it with a helicopter and small fire crew to determine appropriate containment options, utilizing minimum impact fire suppression tactics and natural barriers such as granite ridges and wet, green meadows.

The lightning caused Pond Lily fire is 8 acres and located west of Devils Postpile and Mammoth Lakes in the John Muir Wilderness between Cold Creek and Pond Lily Lake. This is being aggressively suppressed due to its proximity to the John Muir Trail.

Fire resources that worked the fire throughout the day yesterday were 7 smokejumpers, 2 large Type 1 helicopters, one Type 2 helicopter, 1 Type 3 helicopter, 1 hotshot crew, 5 helicopter personnel, and 1 five person engine crew. The Incident Commander, Jayson Smith, reported excellent progress was made constructing line and that the fire is currently 50% contained with both hand line construction and a hose line expected to be completed around the fire perimeter by today.

The Incident Commander anticipates releasing the smokejumpers and engine crew Wednesday. Further updates on this fire will be provided as containment increases.

The lightning caused Springs fire is located near Pilot Springs, south of Highway 120 East and east of the Mono Craters. This area has seen numerous previous prescribed fires, mechanical thinning and logging treatments. The fire is currently 1.15 acres and smoldering in Lodgepole pine and mixed conifer.

Inyo National Forest Interagency Fire Management Officer, Taro Pusina states that, “We are seeking to take advantage of one of the wettest winters on record, abundant firefighting resources and relatively few regional wildfires to appropriately respond to a lightning fire and safely reintroduce fire to an area that historically received frequent fire”.

A containment area of approximately 2,000 to 3,000 acres is being considered for the purpose of managing for multiple objectives including protection, suppression and resource benefit. There are 2 Type 1 wildland fire modules currently assigned to this incident, with more resources on order and arriving through the day today.

Forest managers will work closely with the Great Basin Unified Air Pollution Control District to ensure that potential smoke impacts to nearby communities and recreation areas are limited and mitigated to the extent possible.  Expect smoke to be visible along Hwy. 120 east and in and around Mono Lake.  Adjacent recreation roads may be temporarily impacted and or closed for use by firefighters and equipment. Regular updates will be provided on the Springs fire.