By News Staff on June 29, 2015 in Government Agencies/Utilities

Staff from U.S. Fish and Wildlife regional offices were on hand at the Inyo County Board of Supervisors June 16 meeting, providing an update on future and current endangered species listings. The entourage came in response to the Supervisors request to open a dialogue on proposed critical habitat for the yellow-legged frog and Yosemite toad, an invitation issued in early 2014. 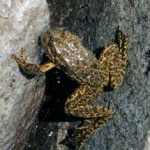 “I was a little caught off guard,” said Board Chair Matt Kingsley in a phone interview. “I thought they were going to talk about bobcat trapping.” Kingsley admitted to Ted Koch, field supervisor from Reno, that the Supervisors were frustrated a year and a half ago with the extent of the 62,000-acre combined critical habitat but had since calmed down.

Multiple USF&W offices were represented because of the complexity of the department’s organization. The Owens Valley geographically is within the Reno district, but the frog and toad are managed out of Sacramento and desert species from the Carlsbad/Palm Springs sub-office.

Public input on the amphibians’ habitat is long gone, but will be taken into consideration, along with the department’s economic analysis, before the final decision on critical habitat is handed down in a couple of months according to Jane Hendron, USF&W public affairs officer in the Carlsbad office.  The analysis “looks at the impacts on fish stocking, grazing and recreational uses” within the designated habitat, Hendron said in a phone interview.

Despite their endangered designation and protected habitat, the fate of the amphibians remains precarious. According to Koch, the California Department of Fish and Wildlife has been making progress by pulling fish out of high-elevation lakes and reintroducing the frog, but there is no solution to the fungus that has decimated the populations. “We’re still losing (the frog and toad) faster than they can be reintroduced,” he said.

Supervisor Mark Tillemans questioned the areas where fish were removed, indicating that some of the lakes did not provide the shoreline and vegetation the frog and toad prefer. “Just because a lake is within the habitat boundaries,” Koch said, “doesn’t mean all fish will go.” When Tillemans pointed out that the designation rule indicated that non-native fish would be removed from all lakes within the habitat, Koch said he would “make a note of that.”

The Supervisors were also curious as to why the sage grouse potential listing was resolved without the regulatory impact of the yellow-tailed frogs and Yosemite toad designation. “Steve Nelson (with the Bureau of Land Management) played a key role,” Kingsley said in reference to the sage grouse. “He brought everybody to the table. Are there opportunities for USF&W to help us with those kinds of grassroots efforts?”

The global threat to frog populations creates a significant difference in how USF&W approaches habitat protection, Koch pointed out.  “It’s a global issue,” he said. “It’s hard for local efforts to overcome.”

The Supervisors’ concern focused on the size of the pending habitat. “With the goal to preserve the habitat, isn’t it better (achieved) through cooperative efforts rather than regulatory efforts,” said Supervisor Jeff Griffiths.

Supervisor Rick Pucci had no argument with the concept of conservation and protection, “the how is the hard part,” he said. “You choose the areas. To you it’s just like a park but to us (the impact) is huge. There’s a lack of coordination between the Sate and the Feds.”

Future listing decisions in the county include the Inyo Mountains slender salamander, Ramshaw Meadows sand verbena, the Nevares Spring naucorid bug and Panamint alligator lizard. “Early engagement is better for all of us,” Kingsley said. “In this county, we have groups that represent every interest. Our ability to represent our constituents hinges on our ability to communicate with you.”

Endangered species, Inyo County Board of Supervisors, US Fish and Wildlife

You can see these little frogs, and their tadpoles, in the shallow mud bottom parts if many lakes in the trail head lakes, and the lakes in the John Muir Wilderness. Animal which feed in them include Sea Gulls, Stellar Jays, Ravens, squirrels, coyotes, Racoons, Chickadees,etc. Trout do not venture… Read more »