By Deb Murphy on May 13, 2021 in Mono County, Mono County Sheriff’s Office

Bob Gardner, Mono County Third District Supervisor, issued a major “ask” back in mid-February when he put together a series of virtual workshops focusing on an exponential growth in dispersed camping.

The source of the problem was assumed to be an unintended consequence of COVID-19. Developed campgrounds, hotels and motels were all closed. And, despite a state-wide shut-down and stay-at-home orders, Southern Californians seemed to make an assault on the once serene Eastern Sierra.  As Mono County Sheriff Ingrid Braun said “they just don’t know how to behave.”

Gardner’s goal with his summit was to do whatever possible to avoid the same carnage this summer. 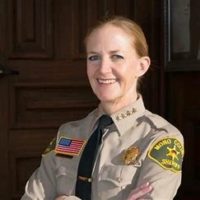 The Internet and social media played a big role in all the plans, followed up by old-style billboards and other forms of signage. Any material posted to the Internet will be at essrp.org, with the exception of stewardship possibilities. The site ESSRP site will be re-vamped with “camping” the tab to get people to most of the information available or generated by the subcommittees.

There are still some missing pieces and unknowns, but those should be at least partially resolved at the final meeting, a town hall on May 25. But here’s a run-down on progress and plans to date outlined at a session with the heads of five subcommittees, each dealing with specific, identified issues.

Alicia Vennos’ education subcommittee met the challenge with an initial message of stay in designated campgrounds backed up by slogans of “do it right,” and “be a dispersed camping pro.” The latter may be edited down to a simple “be a camping pro”. The subtexts were simple: plan ahead, observe fire safety, pack out what you pack in and be a good neighbor aimed at all on-site campers and their drive markets.

The mapping group, headed by Matt Paruolo, seemed to have the easiest task with a lot of maps available. The tough part was identifying those areas where dispersed camping was allowed. The tougher part was the multiple land managers on the East Side. Owens Valley is easy as the management changes as the altitude increases: Los Angeles Department of Water and Power, Bureau of Land Management then the Inyo National Forest Service. Once a visitor heads up the grade towards Crowley Lake, land management isn’t as well defined.

Paruolo’s team came up with an on-line map and a communication plan based on signage and social media to send campers to that map. The added unknown of potential shut-downs due to wildland fires could also be incorporated into the mapping.

Alex Ertaud’s stewardship subcommittee had a similar problem: how to bring together the agencies and organizations involved with the care of public lands and the public interested in the same thing. An example: the Trash Eliminators popped up earlier this year and has very effectively cleaned up a lot of acreage in the Owens Valley. So, how do residents know who’s doing what and how to get involved?  The proposed answer was a collective calendar, hosted on volunteereasternsierra.org, described as an enhanced bridge between agencies or groups and the interested public.

John Wentworth’s infrastructure subcommittee had the simplest job: the Eastern Sierra needs more instructive signage, porta potties and trash bins. Opening campgrounds earlier or year-round would help reduce the late-May caravan of tourists. Another solution: identify locations that may not seem obvious for camping. Bishop Chamber Director Tawni Thomson reminded the group the Tri-Valley Fairgrounds camp area is open year round. There is also space available at June Lake but the site needs porta potties and dumpsters. For funding and management of all five tracts, Wentworth’s solution was Mammoth Lakes Recreation monies.

Finally, Mono County Sheriff Ingrid Braun’s solution for the enforcement element was also relatively simple: “We do what we do every year, just more.” There is now one point of contact for issues that need enforcement: 760-932-7549, ext. 7—the Sheriff’s Department phone number. From there, Braun said, the appropriate agency can be contacted by dispatch. “Maps and signage are key,” she added. “We need no plausible deniability.” The County is currently drafting an ordinance against overnight parking along paved roads—another form of “dispersed camping” that has popped up recently.

The final plans will take shape and be outlined at the May 25 town hall virtual meeting held at 5:30 p.m. Visit Mono County’s Facebook page and scroll down to :CAMPING Update TOWN HALL to indicate your interest in attending.

Enforcement translates into additional staffing which requires money. I’ve got a query to both Bureau of Land Management and the Inyo National Forest to find out if money is the primary reason and when they’ll be able to add staff. My guess is dispersed camping issues will probably be with… Read more »

Just saw a picture someone took of dumped coals observed on the southbound/downhill side of 395 this morning. If I could post that picture here I would. I’m not going to speculate what these people were thinking when they dumped their coals — they either were not thinking (hard to… Read more »

Eastside Local, Mono County is hosting a Dispersed Camping Town Hall on May 25. Visit their Facebook Page for more information. You may have to scroll down on the page to find the post. Already, close to 100 people have already expressed interest on attending. Sierra Wave has been following… Read more »

People will come. They always have and they always will. The pandemic may have just accelerated it a bit. Education, management and enforcement is vitally necessary to address both the bad behavior and the unintended consequences of ignorant behavior.

Enough already with education and management. It’s time for enforcement already for heaven’s sake! The offenders are just laughing at the poetic posey picker educators and managers . Put some teeth in it already!