By News Staff on July 26, 2018 in Fire, Government Agencies/Utilities

The Lions Fire is estimated to be 4,124 acres and 85% contained. The new growth is in the Cargyle Creek area, south of Corral Meadow, on the Sierra National Forest. 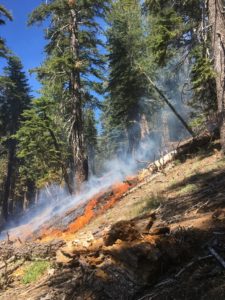 The fire grew approximately 60 acres in size since it was reported to be active again. It is burning along the west flank in the Cargyle Creek drainage. The Lions Fire had been inactive for several weeks.

The fire is showing slow to moderate rates of growth and is burning in heavy fuels of dead and down and snag (standing dead trees) patches. The fire was active through much of last night and similar behavior is expected today.

Inyo National Forest’s Crew 2 and other local resources have been flown in to establish containment lines. They are looking for options to contain the fire as quickly as possible while considering firefighter safety in steep terrain and heavy fuels in the Ansel Adams Wilderness. There are two helicopters dedicated to the incident. More resources are on order.

The area has seen some rain and lightning in the recent days. Warmer and drier conditions are in the forecast, but there is still the potential for lightning and showers in the area.

There is currently no threat to life or property. Smoke may be visible from Minaret Vista, Devils Postpile, Mammoth Mountain, and areas along the Reds Meadow Road.