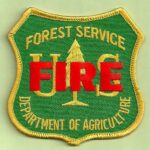 The Incident Management Team is reporting the fire as 25% contained, holding at 586 acres going into this evening. Lateral movement of the Inyo Creek Fire continues to be held. Firefighters continued to build containment lines in very steep and rugged terrain, which is the primary factor why the containment percentages are increasing slowly right now. Some people are being allowed to return home where the fire no longer poses a threat.

Fire is at 15% containment; acreage revised to 497 (down from 640 acres this morning). Calm weather. Let’s hope it holds and winds stay down.

Update on Wednesday, June 23 @12:15 am:  This fir e is in very steep, difficult terrain, making it difficult to send in ground teams. The main concern is mostly that the fire might come down the Meyson Lake Drainage which leads directly to Mt. Whitney Portal. It reportedly has a creek bed with a lot of fuel,” according to Doug Thompson, who runs the Mount Whitney Store at the Portal.

Thompson also said that yesterday, Tuesday, June 22, they had an LEO escort to the Portal to shut off the propane and clear out food from the Portal store and restaurant.  He described how the fire went down the night before to Lone Pine Campground and jumped the Portal Road but was put out quickly by fire crews who has already been staged all along the road, monitoring the fire at the base of the lone Pine Campground. He expressed the concern that, “As always, wind is the problem. It can take the fire back up the canyon, following the creek bed which has a lot of fuel.” We here at Sierra Wave wish him the best.

And, according to Don Zerbal on Eastern Sierra Fire & Ice, who have proven to be a reliable source of information since the fire began, the Fire is currently mapped at 640 acres, with still no containment reported as of yet. Fixed-wing tankers hit the fire hard today (Tuesday, June 22, laying down numerous retardant lines until they were grounded by increasing winds early in the afternoon.

Crews were reporting a moderate amount of scattered heat inside the perimeter today. Based on mapping, it appears that the perimeter of the fire ultimately came within 2/3 mile of some of the structures at Whitney Portal, but none are not threatened at this time. Whitney Portal remains closed, and authorities are working on a plan for rescheduling an opportunity for evacuated individuals to retrieve their vehicles when it is safe to do so.

Current Situation: The Inyo Creek Fire grew significantly last night flamed by wind gusts of 35 MPH. These winds were a diurnal shift down canyon from the West, fanning the fire down canyon into Lone Pine Creek. This also caused multiple spot fires ahead of the fire triggering additional evacuations of residents at Olivas Ranch, Whitney Portal Reserve, and all residents on Whitney Portal Road North of Horseshoe Meadow Road. All these additional residents were safely evacuated last night.

A Type 2 team is on order to take over the Inyo Creek Fire. The team will be briefed this afternoon and take over the fire tomorrow morning. Last night the fire also went into Unified Command with CALFIRE due to state lands being threatened and the threat to structures.

Additional aircraft for today will include an Air Attack over the fire, 2 Type 2 Air Tankers that will be doing retardant drops, and a Lead Plane that helps to guide the Air Tankers. A Mobile Retardant Base is being set up at Lone Pine Airport and will be operational by this afternoon. This will help with aircraft being able to fill and return to the fire faster.

Closures: The Whitney Portal Road is closed at Horseshoe Meadow Road. The Forest is working with the Inyo County Sheriff on the road closure. At this time through hikers that have planned to exit the Mt Whitney Trailhead should use a different exit point such as, the Cottonwood Lakes Trailhead or Onion Valley. Hikers that have vehicles up at Whitney Portal should plan on another exit point. The car retrieval scheduled for today has been cancelled due to the increased fire activity and the risks to public and firefighter safety. An announcement will be made when it is safe to try to reschedule the car retrieval escort.

Update on Monday, June 21, 2021 @10pm:  Before aircraft were grounded for the night, Air Attack mapped the fire at 490 acres, up from 97 acres this morning. Incident Command has requested two Hotshot crews. Unconfirmed report via fire radio traffic that one residence has caught fire. Photo below shows fire soon after dark.

NOTE FROM SIERRA WAVE: PLEASE DO NOT VISIT THE FIRE AREA. THERE IS ONLY ONE ROAD IN AND OUT OF THE AREA AND IT NEEDS TO BE KEPT CLEAR OF BYSTANDERS FOR THE SAFETY OF RESIDENTS, FIREFIGHTERS, AND EMERGENCY VEHICLES! 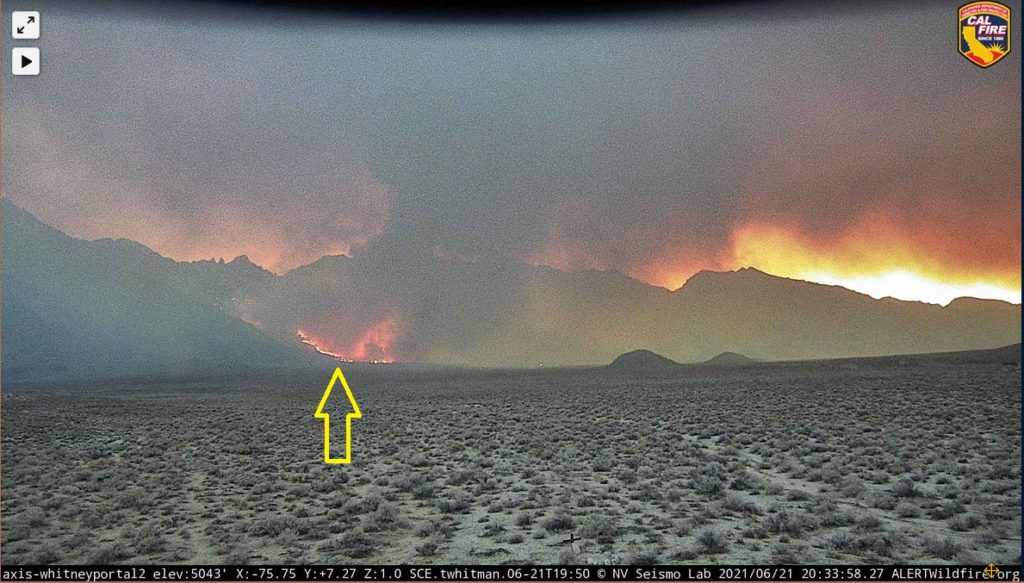 This photo was taken after nightfall. (Photo posted on by Don Zirbel on Eastern Sierra Fire and Ice Facebook)

Here is the latest information from the U.S. Forest Service at 12:37 pm today: 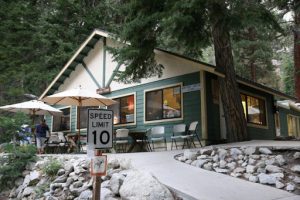 Current Situation: The Inyo National Forest’s Type 3 Incident Management Organization has been activated to take command over the Inyo Creek Fire. An inversion set in over the fire last night which helped limit growth. Spot fires were observed in Meysan Lake drainage in very steep terrain. This has prompted fire managers to send some of the resources assigned up to Whitney Portal to do prep work around structures in the event that the fire makes a run towards the Portal. Most of the fire growth has been in the Inyo Creek drainage due to rollout because of the steep terrain.

Today, crews will continue to strengthen contingency lines below the fire. Helicopters will be used to do numerous bucket drops to cool the fire’s edge.  Multiple other resources are on order.

Closures: Whitney Portal Road is closed at the Horseshoe Meadow Road intersection. The Forest is working with the Inyo County Sheriff’s Office on the road closure. At this time, through hikers that have planned to exit at Mt Whitney Trailhead should use a different exit point such as Cottonwood Lakes Trailhead or Onion Valley. Hikers that have vehicles up at Whitney Portal and are exiting the trail at the Portal can get their vehicles and drive out, however they will not be allowed to go back up. These hikers are also advised to stay up to date on the fire as this situation could change rapidly. People that have vehicles at the Portal and are getting a ride back to their vehicles will not be allowed up the road.

Like I told congressman Obernolte, it’s up to the decision makers to make the tough decisions or MotherEarth will make them for us.. it’s hot, like really hot, no runoff.. unprecedented..the loss of habit will overrule any precious resource we could attain..

Thanks to the firefighters! Those guys and gals are awesome.. when I grow up I want to be one… well actually I’d rather be a major league baseball player.. lol.. but really, thank you to all the first responder agency folks…