By News Staff on May 11, 2015 in General Misc. Stories, Government Agencies/Utilities, Public Event

Numbers and locations have been thrown out since Monday’s Tech Group meeting, but the final decision on how to provide adequate irrigation for Owens Valley agriculture was postponed at Thursday’s Standing Committee meeting. Farmers and ranchers will have to wait until June 4 to know how many cuts they’ll get from their alfalfa fields, how much pasture grass will be available when cows come off the mountain leases this summer. 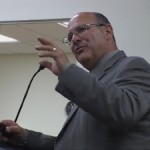 This story will not end until it rains, hard.

At the end of the four-hour meeting, the committee approved four of six motions presented by the Inyo County representatives. None of the motions could be acted upon until the Los Angeles Department of Water and Power meets with the Memorandum of Understanding partners to discuss those projects spelled out in the MOU. Topics of discussion will be modified base flows in the Owens River and the river delta and leaving Warren Lake dry. The Board of Supervisors would consider additional, reasonable water reductions to irrigation, enhancement mitigation and other projects associated with the Long Term Water Agreement, including an updated LADWP Operations Plan, to be decided on at the June meeting. And the final motion: water for irrigation will be maintained at the current levels until the June 4 Standing Committee meeting.

In a committee structure that requires agreement between the City and the County, Los Angeles voted no on Inyo’s motion to reduce the normal water supplied for irrigation by 20 percent, or 39,200 acre-feet, and on leaving McNally Ponds dry. According to LADWP Aqueduct Manager Jim Yannotta, the department wouldn’t have supplied water to McNally anyway as it was “described as a wet year project” in the LTWA. County Water Department Director Bob Harrington did not agree with LADWP’s interpretation of the agreement.

The motion was a good try by the County following Los Angeles City Councilman Felipe Fuentes’ motion to increase the original irrigation allotment from 16,500 to 18,500 by giving agriculture the 2,000 acre-feet saved on Owens Lake. “We are nowhere near the end of this conversation,” Fuentes said, “We need to do what is within our ability to do.” That trial balloon popped quickly.

That the City and County do what they could do quickly was Yannotta’s approach at the Tech Group meeting and, via telephone, at Tuesday’s Board of Supervisors meeting. Monday, Klondike Lake and its 1,500 acre-feet were on the chopping block. However, the first of two 200 acre-feet of habitat area water had already been applied and the birds had already nested. Draining the lake would negate the second habitat watering. Valley alfalfa farmer Zack Smith pointed out that similar birds and their nests could be found on his irrigated fields.

Yannotta assured the County that all water savings would go to agriculture. He also told the Supervisors that the maximum available for irrigation would be 32,500 acre-feet, a significant jump from the original 16,500. The increase would come if LADWP realized a 15,000 acre-feet savings on the Owens Lake dust mitigation. The hitch was timing. The predicted savings would be realized in the fall, after the need for irrigation was over.

In addition, LADWP’s Marty Adams told the Standing Committee that taking 2,000 acre-feet off the lake with an early ramp down had already drawn warnings from the lake’s official owner, California State Lands Committee, and the California Department of Fish and Wildlife.

Inyo Chief Executive Officer Kevin Carunchio suggested turning “the paradigm sock inside out” at Tuesday’s board meeting. His suggestion was to take the 15,000 acre-feet out of storage in Lake Crowley for irrigation now and “replace” it with the same volume in savings in the fall.

Fuentes shot that one down before it got off the ground in the Standing Committee. As of Thursday, Crowley holds 102,075 acre-feet (down more than 1,000 acre-feet from April 30 according to LADWP’s Northern District Daily Report); 80,000 acre-feet is the minimum draw-down, according to Yannotta, to be held for emergencies. According to Fuentes, the City did not have the authority to move water out of Crowley below that minimum.

Nancy Masters and Daniel Pritchard from the Owens Valley Committee and Sierra Club’s Mark Bagley stressed that all of LADWP’s obligations to the valley, including irrigation water, were equally important. “You need to rethink water in storage for use in the valley,” Bagley said.

LADWP will export no water to Los Angeles until November. That water, currently 32,795 acre-feet, is sitting in the Haiwee Reservoir. “There is water to be had,” Adams said, “but not by all. We need to get through this without irreparable harm.”

LA cannot simply remove the water in Crowley from consideration simply because of a city policy or a charter clause. LA bound themselves in the LTWA to supply irrigation water to land in the Valley. The LTWA was adopted by the mayor and city council in compliance with their authority… Read more »

The work in progress that is the LTWA is important into the future as are the current cooperative efforts to deal with the issues of these extreme current challenges of the drought . Althought there are still more challenges to address the process of the LTWA is yielding a path… Read more »