UPDATE 8/28/2020: The latest information from authorities is that Matthew David Hays, a 35-year old man who threatened motorists and officers just north of Pearsonville on Monday, August 24,  has been arrested today and is no longer “on-the-lam.”

How this played out might be for the best considering he could have been shot and seriously wounded, if not killed, when he confronted officers carrying a black scoped rifle, which later turned out to be a pellet gun. 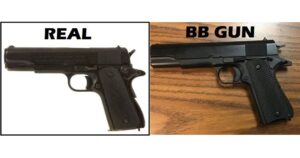 Many toy, BB, and pellet guns and rifles look like their very real counterparts which fire real bullets. Several, often tragic, results have happened when police have mistaken them for real guns.

All the weapons confiscated from the suspect home, including the “black-colored rifle with a scope” found later, and mentioned in the Sheriff’s Office press release on August 25,  were Pellet (Air) gun rifles and one BB handgun. While these types of weapons are far from harmless, they are not as dangerous as real hunting rifles that fire real, high-caliber bullets. Nor are they as dangerous at the real handgun used to fire warning shots at the suspect in the original incident by the threatened motorist after the suspect appeared across the highway aiming a scoped-rifle toward their car. The problem: You often cannot tell a “real” gun from a toy gun, or a pellet or BB gun.

Unfortunately, many BB and Pellet rifles look like their very deadly cousins, especially from a distance. That fact has resulted in numerous fatal encounters with police and in homes across the country because many of these BB handguns and air gun rifles do look very much like the “real” guns used for home protection, target shooting, and hunting. 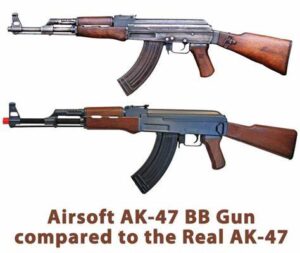 In retrospect, the officers on scene showed remarkable restraint given his aberrant behavior and the suspect was lucky to not have been shot, but was allowed to actually escape despite dozens of officers at the scene, including a SWAT team from the Kern County Sheriff’s Office, and use of the CHP helicopter, which had to abandon its surveillance of the suspect to refuel. There was a report that the suspect was known to law enforcement and that may have played a role in their restraint. Someone familiar with the case said that the suspect’s own family has reportedly said that “he has some mental deficiency.” Whether he does or doesn’t, the important thing is that he is off the street.

PEARSONVILLE, CA, August 25, 2020 – On August 24, shortly after 2:00 pm, Inyo County Sheriff’s Deputies were dispatched to the area just north of Pearsonville on highway 395, regarding a report of a man brandishing a firearm.

The reporting party indicated that a white male wearing a straw hat, light colored flannel long sleeve shirt, cargo pants and brown colored hiking boots had approached them on foot out of the desert area near Sterling Road. The man said, “Que pasa,” to the party who had pulled over to change a flat tire. The party explained that they didn’t speak Spanish, and the man walked away.

Moments later the man returned and stood on the opposite side Highway 395. The reporting party observed the male lay down on the ground holding a rifle pointed at the vehicle. The reporting party was alarmed and fired a warning shot from a registered handgun in the air to try and scare off the male. The reporting party described being afraid for their lives and began to slowly drive away southbound without finishing the change of the flat tire.

Further description of the individual with the gun revealed that the suspect was Matthew David Hays, a 35-year old man known to law enforcement. Deputies arrived on scene near Hays’ residence; moments later Hays appeared from his trailer. Deputies observed Hays holding a black colored rifle with a scope. Numerous announcements were made to drop the firearm.

At one point, Hays began running towards law enforcement while holding the rifle and continued holding the rifle at the low ready position with the muzzle end of the rifle slightly raised. Hays eventually began walking off north-westerly into the desert.

A CHP helicopter responded and observed Hays in the desert, still with a rifle. However, the helicopter was forced to refuel and lost sight of Hays.

The suspect is described as a white male, 6’2”, 165 pounds, brown hair, blue eyes. The public is strongly encouraged to contact the Inyo County Sheriff’s Office at 760-878-0383, option 4, if anyone has any information that can lead to the arrest of Matthew David Hays.

I just saw the Guy walking through Olancha, they have released him back to the Public. He must be sane?

What about if he was a black guy?
He would’ve been shot without hesitation ????

Why does everyone jump to this, Jesus. How about GREAT JOB LEO’S for keeping the community safe and this man. I’m sure his family is very appreciative! In this world, at this time, spread positive, ignore the negative.

Did he surrender? How was he arrested? His mugshot is on the inmates list.

Our understanding was that the arrest was made without incident and he was taken into custody peacefully.

Hey You !
In this case,think they maybe should have,for the safety of others,and think they would’ve been justified if they did..

One thing I’m sure of, if SWAT was within a thousand feet , one of them could have hit him. Hope the guy gets the help he seems to need before he gets out.

“At one point, Hays began running towards law enforcement while holding the rifle and continued holding the rifle at the low ready position with the muzzle end of the rifle slightly raised. Hays eventually began walking off north-westerly into the desert.” Must be a white guy, since LEOs didn’t pump… Read more »

I thought world war 3 was taking place. all that Law Enforcement and that could not catch the Guy, That does not make sense, must have cost Inyo county a ton of money, and the Guy is still at Large.

Any update from LEO? Do we still have a crazy man on the loose?

Alarmed That’s what they teach you. If you’re going to pull out of holster,rack a round and shoot,shoot what you’re aiming at. Like Sugarmags says,a long shot with a pistol,maybe unlikely to hit a crouching target,but 10-11 shots coming his way gives you a better chance of either hitting the… Read more »

I agree empty the magazine don’t use a warning shot. My point is NEVER tell the police it was a warning shot the penalty for that is very draconian.

Alarmed
With the guy crouching down and aiming a rifle at the man and his family,I’ve got to think the perp was very lucky only to get a “warning shot”.
With many,that kind of behavior would’ve gotten an open fire and empty the clip response…

the odds of hitting the suspect with a shot from a handgun, when he was located across the 4 lane freeway, with a 100′ median, are nil. On the otherhand, the long gun could quite easily be used to shot the victims. This whole thing seems crazy…that he could get… Read more »

Warning shots are illegal regardless of the circumstance!!! Anyone that has taken a Safety class or CCW class should be aware of that fact. Additionally, the projectile could have injured an innocent person.