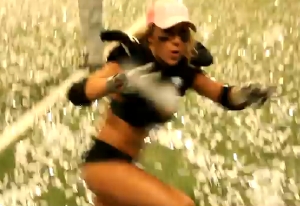 The Margulies family of Mammoth Lakes marked a kind of super bowl victory recently and plans for a special movie moment.

First, Melissa Margulies.  She belongs to the LA Temptation, a women’s football team in the Lingerie Football League.  The Temptation squared off with the Philadelphia Passion in Las Vegas and won their third Super Bowl.  Melissa is a graduate of Mammoth High School and also a personal trainer.  Father, Marc Margulies said the LA Temptation won 28 to 6.

Although he says he’s not usually a gambling man, Marc did bet $100 on the Temptation and won $190.  This, even though the Las Vegas odds, he said, had the Temptation losing by 4 and a half points.

The LFL won widespread press over their win.  As confetti flew in the air and on the ground after the game, some of the Temptation players laid down to make snow angels.  A photo of their antics made it all the way to the Hong Kong press.  Next on Melissa’s agenda – the LFL All Star game.  She was selected as one of the players.

On to Marc Margulies who spends lots of time behind the camera on film shoots all over the world.  His most recent credit includes an on-camera assignment in the just released “Act of Valor” movie, all about the Navy Seals heroics.

In fact, a Mammoth Lakes screening of “Act of Valor” will also serve as a fundraiser for Disabled Sports Eastern Sierra, Friday, February 24, at 7pm at Minaret Cinema.  210 seats will be available and donations are requested.