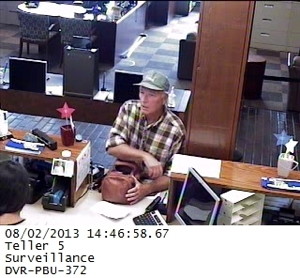 Earlier, Mammoth Police were seeking a potential suspect vehicle related to the Union Bank robber. Now, Police Chief Dan Watson says that the vehicle and its owner have been located and identified.  He said the MLPD is no longer seeking assistance in locating this vehicle. Police continue to pursue other investigative leads.

The Mammoth Lakes Police Department (MLPD) is seeking the public’s assistance in locating a possible suspect vehicle related to the Union Bank robbery that occurred on Friday, August 2, 2013.

The Mammoth Lakes Police Department (MLPD) is seeking the public’s assistance in locating a bank robbery suspect.  On Friday, August 2, at approximately 2:45 p.m., a man entered the Union Bank in Mammoth Lakes with a small leather bag.  The suspect approached the teller and handed her a note.  The note was printed in English and Spanish and read, “ROBBERY.”  The teller then handed the suspect money. As the suspect walked towards the exit door, the teller activated the silent alarm.  The MLPD arrived within three minutes and checked the area but were unable to locate the suspect.