The stuff of life grew more mysterious today. NASA scientists found that bacteria at Mono Lake can spin its DNA out of 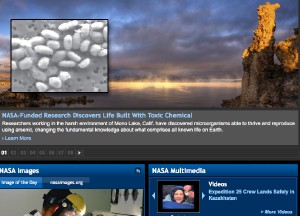 Ed Weiler, NASA’s associate administrator for the Science Mission said, “The definition of life has just expanded. As we pursue our efforts to seek signs of life in the solar system, we have to think more broadly, more diversely and consider life as we do not know it.”

This astonishing discovery followed more than a year of exploration by NASA at Mono Lake where the harsh environment is thought to mimic planets in outer space.

According to NASA, the little bacterial microbes found at Mono Lake use five of the usual six building blocks of life – carbon, hydrogen, nitrogen, oxygen and sulfur. Instead of phosphorus, the Mono Lake life forms use the usually poisonous arsenic to build their DNA.

The bacteria themselves are common. What they do is not. Another NASA scientist, Carl Picher, said, “The idea of alternative biochemistries for life is common in science fiction. Until now,” he said, “a life form using arsenic as a building block was only theoretical, but now we know such life exists in Mono Lake.”

Mono Lake Committee Executive Director Geoff McQuilkin has fielded calls from all over the country and the world about today’s news. “Life is more adaptable than we thought. When we go to Mars or out in the ocean we are looking for things as we know them. No one ever looked for arsenic as a life component.” McQuilkin also pointed out that the new discovery also amounts to one more reason to save Mono Lake.

We work to provide daily news to all of the Eastern Sierra, in the tradition of Eastern Sierra News Service and the Sierra Wave. We bring you daily happenings, local politics, crime, government dealings and fun stuff. Please contact us.
View all posts by News Staff →
Court Cases: Weapon Possession, Murder, Arson, Drugs
Little Guys: Molly and Opie