Mammoth’s air quality problem has grown somewhat recently, and locals wonder about airborne dust, they say, every time they see the town street sweeper and the cloud of dust it kicks up. 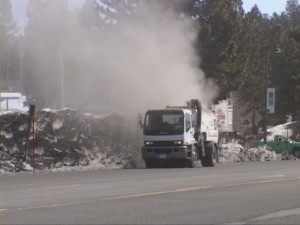 APCD Director Schade had earlier talked to the Mammoth Town Council about air quality issues. He had said that the trend for air pollution in Mammoth was on the rise now after many years of decline. 15 or 20 years ago, Mammoth’s air violated government standards, mostly due to wood-burning stoves and street cinders.

With stove change-outs, the air improved. Schade said that maybe with hard economic times people have begun to burn wood more than use propane.

As for the dusty street sweeper, Mammoth Public Works Director Ray Jarvis said the equipment is actually state of the art and only a couple of years old, but the amount of cinders used on 203 and other streets leaves a lot of dust.

Jarvis said that sweeping up the cinders without dust is impossible. He added that the Town does have no burn days. If you want to check that out at any time, call 934-1010.

We work to provide daily news to all of the Eastern Sierra, in the tradition of Eastern Sierra News Service and the Sierra Wave. We bring you daily happenings, local politics, crime, government dealings and fun stuff. Please contact us.
View all posts by News Staff →
Bureaucrat Beat: Our Money, Girlymen and Dead Beats
Mammoth Resident Dies After Snowboard Accident