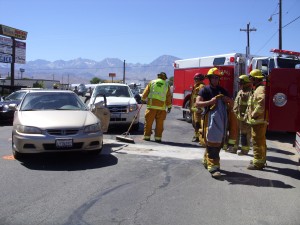 At 1:36pm a white Ford SUV broadsided the Honda sedan as the driver attempted to make a U-turn on Wye Road just a few feet east of the intersection with Main Street.

Wye road was closed briefly east of Main street while the emergency responders moved the SUV in order to free the driver from the vehicle. Paramedics took some time to lift the injured woman from the vehicle, stabilize her condition and place her in the waiting ambulance. She was transported to Northern Inyo Hospital and was released later the same day after treatment. The names of those involved have not been released. It is believed they were from out of our area.

We work to provide daily news to all of the Eastern Sierra, in the tradition of Eastern Sierra News Service and the Sierra Wave. We bring you daily happenings, local politics, crime, government dealings and fun stuff. Please contact us.
View all posts by News Staff →
Home Inspections Aimed at Saving Structures
Cyclist Sustained Major Injuries in Hwy 203 Accident