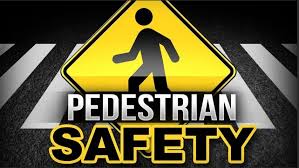 Two women pedestrians were injured after being hit by a pikup truck early Saturday morning, March 6, 2021, in Bishop, according to a report by the Bishop Office California Highway Patrol. According to the accident report the major injury accident occurred at around 1:15 a.m. on the southbound U.S. 395, just south of Pa Ha Lane.

The two women, ages 21 and 24, were walking on the inside lane of southbound U.S. 395 when they were struck by a 2001 Dodge pickup heading southbound at approximately 30 to 35 miles per hour.

The driver of the involved vehicle, a 43-year-old, stopped at the scene. Alcohol or drugs were not considered a factor in the accident.

The crash remains under investigation.

TIPS FROM THE CALIFORNIA OFFICE OF TRAFFIC SAFETY (OTS)

Stay OFF your phone whether driving or walking! Pay attention!

Pedestrian Accidents Numbers according to the California Office of Traffic Safety (COTS):

Safety tips for pedestrians from the California Office of Traffic Safety (COTS):

Safety Tips for Drivers from the COTS:

Caltrans numbers each freeway lane from left to right. The “fast” lane is the number 1 lane. The “slow” lane (closest to freeway entrance/exits) is numbered according to the total number of lanes (anywhere from 2 to 6 in Los Angeles County).

There’s already a crosswalk at Barlow, and there is literally nothing on the opposite side of 395. Even if you have the right of way the vehicle is going to win.

desco….
Another tip
Don’t walk on 395 ANY time of the day or night,unless your vehicle breaks down and you absolutely have to…

Crosswalks to nowhere are a terrible idea and cause more pedestrian injuries. There’s no reason to have crosswalks to fields on the northbound shoulder.

There are existing sidewalks up to Brockman Lane for a reason.

Another tip , don’t walk on the southbound OR northbound 395 ever . That’s what the shoulder is for .