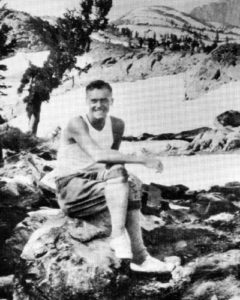 A potluck dinner and business meeting begins at 6 PM at the Lee Vining Community Center; the program at 7 PM.  Crittenden’s slide talk  investigates parallels between the disappearance and subsequent searches for two mountain climbers who went missing eighty years apart.

Peter Starr, a charming and devoted climber, disappeared in the Minarets in 1933, triggering a massive search led by the mountaineering giant, Norman Clyde.

In 2013, Matt Greene, a school teacher from Pennsylvania, disappeared from his campsite in Mammoth Lakes, leaving behind tantalizing clues that he too was headed toward the Minarets. 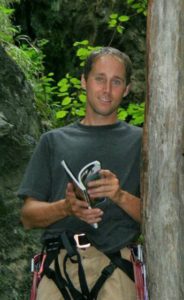 Although no official search was raised for Matt, devoted searchers, including Matt’s father himself, undertook several arduous and dangerous search efforts. Both men were similar in temperament, age, education and attitude. The disappearances prompted groundswells of effort.  Although moresearch technology was available in 2013, such as GPS, mobile phones and high definition video, the search for Matt Greene was hampered, if not impeded, by the fact that his car was undergoing repairs and he had left the campground on foot. The dedication and drive of the searchers in both instances will be described, and the obsession for the climbers’ families to find closure.

After Jennifer Crittenden moved with her family to the Eastern Sierra in 2014, she wrote The Mammoth Letters: Running Away to a Mountain Town.  She is the author of three business- and career-related books and coordinated the first annual Mammoth Lakes Book Festival in 2018, and also the upcoming 2nd annual festival, which will be on July 14 at Hayden Cabin in Mammoth Lakes.

All are welcome to this free event.  Visit the Mono Basin Historical Society webpage at www.monobasinhistory.org.