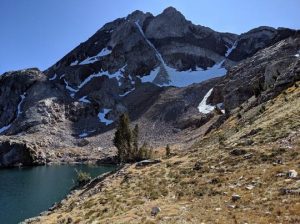 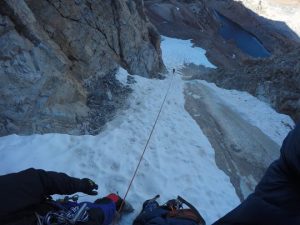 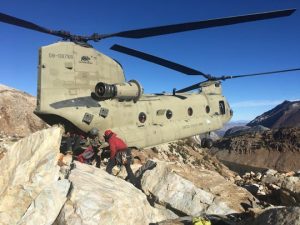 On Monday, October 28, the Mono County Sheriff’s Office (MCSO) received notification that two women were overdue from a back-country excursion. Jennifer Shedden, age 34, of Mammoth Lakes, and Michelle Xue, age 22, of Los Angeles, had set out on Saturday, October 26, from Convict Lake to climb a couloir on Red Slate Mountain with the intentions of returning the evening of Sunday, October 27.
With the assistance from friends of Michelle and Jennifer, MCSO Search and Rescue (SAR) deployed a team, as well as a California Highway Patrol Helicopter (H40), to the location. Both H40 and SAR members located the women midway down a steep couloir at approximately 12,400’ elevation. Based on observations from H40 and SAR teams, their positioning and lack of response, they were presumed deceased. Due to impending darkness, high winds and steep terrain, the recovery effort was postponed until the next day.
On the morning of Tuesday, October 29, a National Guard CH-47 Chinook Helicopter inserted a team of eight SAR members at the base of the couloir. With weather conditions continuing to hinder the recovery efforts, three experienced SAR climbers made their way up the couloir to the women, who were still anchored into the ice by their equipment. The SAR climbing team faced active rock fall from the terrain above, discharging rocks and material into the couloir.
After an approximate 1100’ ascent on the ice, the SAR climbing team reached the women and confirmed they were deceased. It appeared that the women, though very prepared and well equipped, were struck by large rock fall event at an unknown time on their route. The SAR climbing team determined that based on the quickly fading daylight and current climbing conditions (active rock fall), they could not safely lower the women without further endangering themselves or the SAR members below. Using the information and observations from the SAR climbing team, and projected favorable wind/weather conditions, a plan was implemented for an additional short haul capable helicopter resource (Yosemite Search and Rescue Helicopter YOSAR 551) to be on station early the following morning.
On the morning of Wednesday, October 30, YOSAR 551 arrived on scene to assist with the recovery. YOSAR 551 was able to successfully short haul insert 2 rescuers onto the ice field where they extracted the two women. YOSAR 551 transported them both to Mammoth Airport, where both sets of parents and many friends had gathered.
The Mono County Sheriff’s Office holds Jennifer, Michelle and their families and friends in our hearts and thoughts during this difficult time. A SAR mission such as this also weighs heavily on our SAR team and responding MCSO personnel, who put in extensive efforts to return these women to their families.

Yes – how about “two perish in climbing accident”?

And why not say it occurred on Red Slate Mountain rather than “near Convict Lake”?

Bad headline! They died as a result of an accident which is sad enough… no need to make it even worse. Killed makes it appear to be intentional.

Some will say that these women died doing what they loved . I seriously doubt their families will agree . I understand the need to challenge yourself , and the love of the outdoors, but …