By News Staff on May 6, 2014 in Government Agencies/Utilities 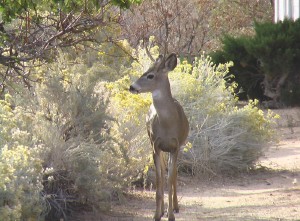 The force of the impact launched the deer in a north easterly direction where it collided with Mr. Owens motorcycle. The motorcycle traveled off the roadway and Mr. Owens was ejected. Ms. Kroenlein was able to move her vehicle safely out of traffic. Mono County Paramedic Fire/Rescue Seven from Bridgeport, Mono County Sheriff’s Department and CHP responded to the scene. Ms. Kroenlein was uninjured. Mr. Owens suffered moderate injuries and was transported by Medic Seven to the Sonora California Department of Transportation facility. Mr. Owens was subsequently transported by Care Flight to Renown Regional Medical Center.

At approximately 8:00 A.M., Ms. Michaela Morado of Mammoth Lakes, California, was driving her Ford Fusion southbound on US-395, south of SR-203, at approximately 70 MPH. A deer ran westbound across lanes and collided with the left side of Ms. Morado’s vehicle. After the collision, Ms. Morado was able to drive her vehicle to the right shoulder. Mono County Paramedic Fire/Rescue Three, from Mammoth Lakes, a Mono County Sheriff’s Deputy and CHP responded to the scene. Ms. Morado sustained minor injuries as a result of the collision and was transported by Medic Three to Mammoth Hospital.

Lieutenant R. D. Cohan, CHP Bridgeport Area commander, added “As winter comes to an end we are beginning to see an increase in collisions involving wildlife. Unfortunately, these two collisions serve as a reminder of some of the potential dangers of driving in rural areas. Please remember to watch your speed and watch for wildlife”.

Lt. Cohan also said that in addition to the injuries sustained by both drivers, both deer were pregnant. He said, “We share this beautiful area with wildlife. I hope all drivers respect that ‘we’ are in their natural habitat, and I hope exercise appropriate respect, when possible.”

We work to provide daily news to all of the Eastern Sierra, in the tradition of Eastern Sierra News Service and the Sierra Wave. We bring you daily happenings, local politics, crime, government dealings and fun stuff. Please contact us.
View all posts by News Staff →
Watch out for deer
Energy plan meets with general approval
9 Comments
Newest
Oldest Most Voted
Inline Feedbacks
View all comments

They were having the same problem North of Reno years ago and decided to build underpasses for the deer with 8′ fences that guided them into the tunnels. It actually worked. Maybe Cal Trans could learn from this and try one or two in the Long Valley area.

Thanks for stating the obvious. That was my dad! and believe me I know a lot about wildlife myself, and what they are capable of. I was just expressing my thoughts on the topic, that if the county road crew would check for damaged or downed fences it might save… Read more »

in fact… if the county cared at all, they would post more signs, build better fences and be sure the road ways are patrolled.

Ever seen a deer jump? A mature buck could clear an 8 foot fence if it wanted to. A bear would just find a way to crawl over it. Building fences to contain wild animals would be really hard and expensive and if they really contained the animals, those animals… Read more »

It’s always impressive to watch the Elk go across 395 down near Tinemaha Reservoir. Those fences along side the highway don’t slow them down a bit.

Every time I see them crossing the highway I think of the late Lone Pine Postmaster Phillip Royal.

people don’t go driving around saying they are going to hit an animal because they don’t have respect for it….

local…Respecting the wildlife is by slowing down when you get to either the obvious areas they cross without a sign to warn you….or in the areas where there are signs to warn you….not ignoring them and continuing along at 70 + MPH……

“”Lt. Cohan also said that in addition to the injuries sustained by both drivers, both deer were pregnant. He said, “We share this beautiful area with wildlife. I hope all drivers respect that ‘we’ are in their natural habitat, and I hope exercise appropriate respect, when possible.””” like we don’t… Read more »

It never hurts to suggest respect for wildlife.
Benett Kessler