On Saturday, September 16, 2017 at approximately 1:36 a.m., the Bishop Police Department received a report of an attempted robbery in the 100 block of Whitney Alley. 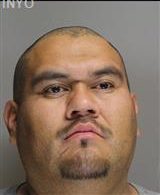 The victim was sitting in his parked vehicle when a male subject approached the driver’s side door of the vehicle. The suspect threatened the victim, entered the vehicle and sat in the driver’s seat. A second male also entered the passenger side of the vehicle. After a short time, both men exited the victim’s vehicle, entered an awaiting vehicle and left the area. Additional witnesses identified the alleged armed subject as Steven Daniel Ariaz, Jr. 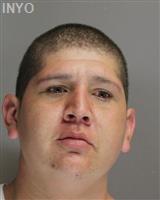 With the help of witnesses on scene, a description of the suspects and vehicle were given to the California Highway Patrol and the Inyo County Sheriff’s Department who assisted the Bishop

Police Department with locating the suspects. Both suspects were arrested in the 700 block of Tu Su lane in the unincorporated area of Inyo County.

Steven Ariaz, age 34 of Bishop and Dillon Bever, age 26 of Bishop were arrested and transported to the Inyo County Jail. Both subjects were booked on various felony charges.

INYOFACE…I know many,many Native American “boys” that aren’t being “forced” to live in poverty on Government Reservations…and doing well,working good jobs and good family providers,as well as good Husbands and Fathers…getting past the possible poverty issues by making good choices earlier in their lives,some even making those choices and changes… Read more »

Behind bars or in bars?

Poor Poor Native boys ! Forced to live in poverty on a U.S. Government Reservation. Surrounded by Racist White Bigotry and Hate since the day they were born . Profiled and Abused due to their RACE by City / State / And federal law enforcement ever since they could walk.… Read more »

Lets not forget……….because a person has been arrested does not prove their guilt. Jusr as one shoud not assume that all words which are written and or spoken, are indeed words of truth.

stoopid….I think YOU are reading what you want to read and see in the article….says “victim was sitting in his parked vehicle,victim was threatened, suspects entered the vehicle “…..and goes on to say “additional witnesses identified the alleged ARMED subject as….”….sounds to me like a possible car-jacking attempt going on… Read more »

Low- did we read the same article? The suspects fled, not the victim. And the victim said he was threatened, he did not say he was threatened with a weapon. Have you seen these guys in person? They are big boys. Both over 6′. Had someone been in the car… Read more »

….ALWAYS a stoopid excuse,huh ? …got in the wrong car…I gotta admit,I’ve done that myself a couple times in my younger and “other” life back then,once leaving Dodger Stadium after a baseball game….but thing is,the car was unoccupied,and if it weren’t,and if someone was sitting in the front seat,don’t think… Read more »

They were drunk and got in the wrong car. Geeeezzz

Almost Native….judging from your last sentence on your post there ( “There is probably more to this story then what our so loving police dept. admits ” ),seems maybe you’re thinking LE,since innocents Bencoma and Ziggy can’t be “picked on ” for a while now, maybe they have possibly found… Read more »

I’d call this a drunk and stupid move at closing time outside a bar. If they have done other things like this in their past I would agree with throwing the book at them. There is probably more to this story then what our so loving police dept. admits.

I say get rid of this scum for good!! Throw away the damn key…. how many times can these guys get away with acting like thugs. You know they are crying their eyes out now they are locked up.

I’m not defending them but I will defend all the good people that live on Tu Su lane.

Me too , but the good people have to get with the Sheriff’s Dept. , & make it a team effort to rid TuSu lane of the criminal element . The “Us against them” attitude needs to go away.

Community service and week on jail.

…or maybe much more penalty than that if they came up to the wrong vehicle and started to assault the driver…. laws are way lenient to those threatened by a couple of creeps either assaulting, attempted burglary,or coming across as an attempted car jacking and entering their vehicle…much the same… Read more »

It is crazy that the suspects are always “later identified”. But never by the victim and never in court under sworn testimony. “Assossiated vehicle” neither of these guys own a vehicle.

stoopid, what article are you reading, where did you quote “associated vehicle” from?
I believe you when you say “neither of these guys owns a car” because they were seen carjacking the victim, or attempting to anyway.

Tinner…..from what I understand,you got to jump through a LOT of hoops to get a CCW here in California and Inyo County…..up in Oregon,all it took was a $60 fee and a four hour class…..I got one up there after I was robbed at gunpoint by a guy dressed up… Read more »

Low, I believe you, everything in CA requires a lot of bs, probably has something to do with the state’s debt.
I can always keep em locked and loaded in the house.

Seriously considering for applying for a concealed carry permit, granted I’d never be found behind Rusty’s at 1:30 in the morning. I think I will load another magazine and keep it next to my 2nd Amendment, maybe I’ll purchase another one for another part of the house. I know there… Read more »

Another attempted armed robbery in the Eastern Sierras?

No need for this negative energy in one of the most beautiful places on the planet.

I’m gonna go out on a limb here , and guess these guys are no strangers to local law enforcement. And the address, Tu Su lane …would that happen to be in the same neighborhood where a majority of Bishop Police contacts are made ?