By News Staff on August 6, 2014 in Government Agencies/Utilities

On Sunday, August 10, the Metabolic Studio IOU Theatre invites the public to experience, “DUST,” a LIVE radio play that originally aired as a Twilight Zone TV episode in 1961.  This haunting, hopeful story follows a young man in a dusty western town who is scheduled to be hanged after being found guilty of killing a child while driving drunk. His father begs for mercy but the Sherriff must 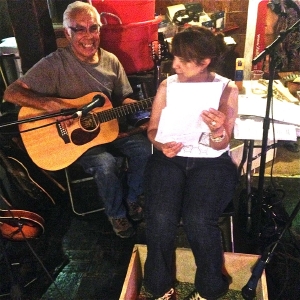 proceed with the death sentence.

A traveling salesman takes advantage of the situation by selling the desperate father ‘magic dust’ whichhe claims will make the townsfolk take pity on his son and save his life.

This radio play is FREE to the public and will be staged at 7 p.m., Sunday August 10, at the Double L saloon, corner of Main and Willow, in Lone Pine. Those under 21 can hear a live broadcast of the performance at the IOU Garden next to the Double L. The IOU garden will also host an Open House offering free IOU espresso drinks from 5 – 7p.m. on Sunday August 10, 2014.  The radio play can also be heard live on the Internet at: kppglive.org

We work to provide daily news to all of the Eastern Sierra, in the tradition of Eastern Sierra News Service and the Sierra Wave. We bring you daily happenings, local politics, crime, government dealings and fun stuff. Please contact us.
View all posts by News Staff →
El Portal Fire: 100% containment of perimeter
Mono SAR helps injured camper