Marc Bandini and his neighbors in West Bishop have a problem, one that started last fall but continues every time the wind kicks up. 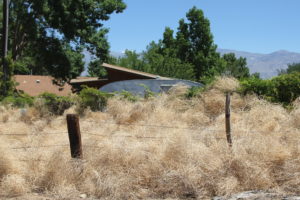 Bandini lives on Tumbleweed Rd.; the problem, ironically, are tumbleweeds, gathering in dense masses against fences that separate homes from a grazing lease, jumping into yards, dancing down the street only coming to rest when they run into an immovable mass, like a house or RV.

After spending most of winter and spring rounding them up and burning them, Bandini’s about had it. His concern is the potential for fire now that warm weather has drawn kids on bikes, dog walkers and strollers across the lease. It’s easy-going now that all the tumbleweeds are stuck to residential fences. A burning tumbleweed morphs into a flying Molotov cocktail in even a light wind. 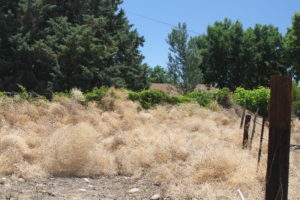 He called the landowner, Los Angeles Department of Water and Power. So did KSRW. “The property in question….is part of a current ranch lease…. The lease agreement requires the lessee to maintain the property, at its own cost, such that no undesirable, unsightly or nuisance condition exists…. The lessee could not be expected to keep the area tumbleweed-free, but the lessee would be expected to remedy an unusual accumulation along the fence if the neighbor’s concern was brought to their attention.”

That makes sense. Lessees or renters can’t expect the owner to come clean up their mess. 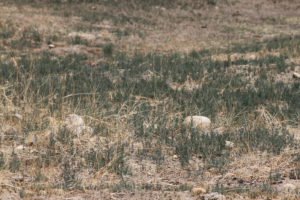 Apparently tumbleweed is a generic term for weeds that die, break off and get airborne. The Owens Valley’s particular brand is Russian thistle, brought to this country, as legend has it, in the pockets of folks seeking religious freedom in the States. According to the UC Integrated Pest Management Program website, the thistle moved to Lancaster, California in a cattle car in 1895. It grows easily where nothing else does.

That breaking off and going airborne thing—that’s part of the tumbleweed conspiracy. As they chase each other across a barren landscape, they’re dropping their evil little seeds, as many as a quarter-million per plant, eventually choking out non-obnoxious plant species and dominating the terrain.

Bandini should thank his lucky stars he’s here and not n Mobridge, South Dakota where
“tens of tons of tumbleweeds…buried many houses so deeply that mechanical equipment was necessary to remove them and release occupants,” according to Wikipedia.

“Control of Russian thistle is difficult,” according to UCIPM. The blister mite attacks only Russian thistle stunting its growth by eating the growing tips. Other possibilities: seed-feeding and stem-boring caterpillars and a couple of different weevils. Cows won’t eat tumbleweed, but horses will. A strategy that has worked: irrigate, let the suckers grow the first year, keep irrigating and eventually good stuff will reduce the volume of tumbleweeds.

April Zrelak and her grandkids are the unofficial Tumbleweed Eradication Committee in Independence. Her strategy: pick the little guys when they’re small and just leave the dead bodies on the ground to enrich the soil.

The only viable alternative for Bandini is having the lessee pull them away from the fences.

tumble weeds have invaded most of central and southern California over the last 2-3 years.

Tumbleweeds have invaded a lot of the 2015 Round Fire area. Swall Meadows residents are struggling with piles of the nasty dried plants, which the wind blows up against houses and trees. In Round Valley on DWP land there are fields of tumbleweeds where there was once native vegetation. Cheatgrass… Read more »

The rancher and DWP employees have been on the lease property several times over the last year seen the tumbleweeds and done nothing!
The land is overgrazed encouraging tumbleweeds, disease carrying ground squirrels to proliferate and dust. The land should be restored to native plant life!