By News Staff on June 17, 2014 in Government Agencies/Utilities 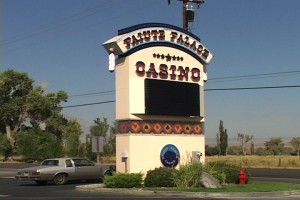 The disputed land lies south of the Paiute Palace Casino.

Even as the Napoles family prepared to go to Tribal Court on trespass citations given to them as they protested what they call a tribal take-over of their lots, the Bishop Indian Tribal Council released a statement detailing why the Napoles have no right to land south of the Paiute Palace Casino.

The arguments have continued. The Tribal officials said they felt they could not satisfy the Napoles but tried many times.

Earlier, Rick Napoles said in fact his Aunt, Geraldine Pasqua holds the lots in question. He said that the Tribal Council has denied this assignment and “want to claim it for Casino expansion.” He also said that last July, tribal members voted down the idea of expanding the Casino. Chairman Delgado did confirm that the Tribe rejected the Casino/ Hotel project on the ballot.

According to Chairman Delgado, the Tribal Court on Tuesday found Napoles family members and their supporters guilty of trespassing. They were fined $500 each. The fines were suspended and the family give seven days to remove signage and live stock from the land.  Rick Napoles said the family will appeal the court’s decision.

Most tribal members living on the Rez and who work for a tribal organization fear retribution from Council Members if they stand up. We, tribal members, should be glad the Napoles family is standing up for what they believe. It shouldn’t be viewed they are holding up progress. The tribe… Read more »