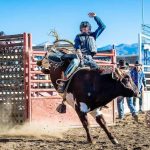 CHSRA Finals cancelled due to concerns over inability to implement social-physical state guidelines under Stay at Home executive order.

In a decision sure to disappoint hundreds of young high school rodeo competitors, their families, spectators and sponsors, the Tri-County Fairgrounds Board of Directors held an Emergency Meeting on Thursday, May 7, 2020, where they passed a unanimous motion to cancel the CHSRA State Rodeo Finals scheduled for June 7 – June 14. As many as 300+ of the state’s best cowboys and cowgirls normally compete at the Tri-County Fairgrounds.

It was obviously breaking a lot of hearts for the board members to have to do so, but they felt they had no choice under the Stay at Home executive order issued by Governor Newsom, even under the latest Phase Two modifications designed to ease some of the restrictions.

The Zoom meeting had 32 participants, according to Fairgrounds CEO Jen McGuire. The participants represented various interest groups sharing their thoughts on the cancellation and there was general consensus across the board that under the state’s physical-social separation guidelines still in effect, and the ever-present threat of spreading the coronavirus in crowds, there was simply no way to go forward with the finals.

In the end, the TCF board felt it was simply too difficult a task and too large a risk to pull off the event in a safe manner consistent with existing social distancing guidelines.