By News Staff on December 30, 2013 in Government Agencies/Utilities

Merry Christmas from the National Security Agency, the spy guys at NSA.  Seems they some how managed to stick spyware in laptops purchased online as Christmas gifts before they were delivered.  Nice.  Next, the NSA, if they haven’t already, will want to install spy gear in our  lamps, alarm clocks and TV remote controls!!!??  Hey, why don’t they just come over for dinner? 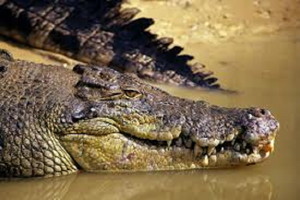 We in the Bureaucrat Beat Newsroom dived into our archives the other day and enjoyed cartoons John Heston used to draw.  He created the character of “Old Croc”, a grinning crocodile, which represented DWP.  Croc would stick his head out of the water to make fun of Owens Valley people and tease them with the prospect of land auctions.  Old Croc may live again.

In fact, Old Croc has been seen slithering about in Bishop canals and chortling about how he’s going to get ALL of the water in South Lake and Lake Sabrina just as soon as the snow melt starts.  Croc will get it all and slip and slide on down the Valley to look for more.

In a remotely related story, did you see Anderson Cooper dive with the crocodiles in the Nile River?  On CBS’s Sixty Minutes, Cooper interviewed a couple that conduct research on crocs by diving down and swimming with them.  Yikes!  Way to go, Coop.

On to a completely different subject.  Did you know some people actually massage the vegetable kale to make it edible?  We know you have to do something to be able to say it’s what’s for dinner!  We in the Bureaucrat Beat newsroom ran into someone quite fond of kale.  In fact, he has given up lettuce for exclusively kale salads!  He swears you just take those coarse, curly leaves, massage them briefly, and – voila! delicious salad.  We are skeptical but open-minded.  Hey, it would give the Mammoth Vons’ Kale Korner a whole new meaning. 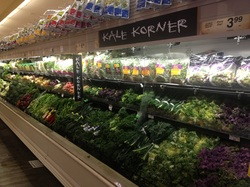 As for the meaning of open government, the organization called First Amendment Coalition won a major court victory that they say makes it clear that “no agency of government can exempt itself from the public’s right to know.”  We’re down with that.  The Coalition said the California Bar Association – that’s all the lawyers in the State – argued that it is not covered by the California Freedom of Information Act law and did not have to provide its records for public review.  The California Supreme Court disagreed – unanimously.  Hand it over hired guns!

The U.S. Government will not easily hand over the right for an Indian Tribe to sue it.  The Fort Independence Indian Reservation has filed a $1.8 million suit in their tribal court against a design firm that worked on roads for their Travel Plaza.  The design firm has turned around and sued the Bureau of Indian Affairs for shutting down the road at some point.  They claim the U.S. Government, not their firm, should pay for the road shutdown.

Legal experts have a sharp eye on this one since the federal government assumes immunity in tribal court. This case will test that assumption.

How about a test to see if trees clean up air pollution.  A study in the UK tested for pollution in a certain number of homes.  Then they placed 30 young silver birch trees in wooden planters in front of four of the houses for two weeks.  The houses with the trees, the study said, had “52% to 65% lower concentrations of particles (PM1, PM2.5, and PM10.)  There you go, Old Croc – plant more trees in the Owens Valley and your burden of dust clean-up will woosh away!

I agree with John! He is absolutely right… Funny you have a legal team that can’t defend the county when any serious lawsuit comes up. They have to hire a firm from LA or Saramento!!! Like Madrid’s Federal lawsuit (so far they hired a LA law firm and a Sacramento… Read more »

Yes, it’s bash the NSA time (as they put me on their watch list), remember those days in high school when learning about our democracy/republic and how proud we were to be part of this country, how liberty, freedom and equality is something the citizens of this country are granted.… Read more »

Hah! Transparent government in Mono County? Just try using C.P.R.A. to get information out of Marshall Rudolph or Stacey Simon at Mono County Counsel. You’ll need a lot of money and the Dream Team to attempt it, and then a Mono County judge will still try to shoot it down.

Please stop this spurious defamation of a hardworking organization of local citizens. Your irresponsible comparison of DWP to Crocodiles is especially offensive to reptiles everywhere. Humans!