By News Staff on February 16, 2014 in Government Agencies/Utilities 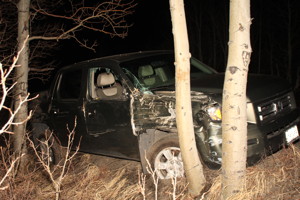 The vehicle was towed from the collision scene and Mr. Calderon-Moreno was subsequently cited and released for DUI and hit and run. Mr. Calderon-Moreno’s driver license was seized and driving privilege was suspended. Charges are pending through the Mono County District Attorney’s Office. “It is unfortunate Mr. Calderon-Moreno chose to drive after drinking. His vehicle was damaged, he lost his driver license and has legal issues ahead. It is fortunate he was wearing his seatbelt, was not injured, and that he did not injure anyone else.” Said Lieutenant R.D. Cohan, CHP Bridgeport Area Commander.

California Vehicle Code Section 20002(a) The driver of any vehicle involved in an accident resulting only in damage to any property, including vehicles……The driver shall also immediately do either of the following: (2)…..and shall without unnecessary delay notify the police department of the city wherein the collision occurred or, if… Read more »

I am in no way defending this guy, but how do you get charged with a hit & run when you damage nothing but your own property (brothers property) ? A good friend of mine was in the exact same circumstances & he left the scene to get medical attention.… Read more »

Perhaps leaving the scene for medical attention is different.
BK

http://www.dmv.ca.gov/pubs/vctop/d10/vc20002.htm Read paragraph (2) in particular. The driver left a vehicle with obvious property damage (noting that the clause regarding property damage also applies to the vehicle causing the collision, not just property or vehicles the vehicle hit) while not leaving a note in the truck saying who was driving,… Read more »