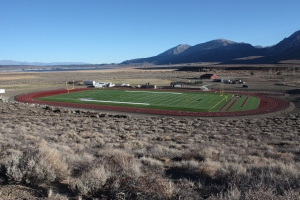 Mammoth Lakes will celebrate the grand opening of the new track & field facility at Whitmore Park. A brief program will precede the ribbon-cutting event that will be followed by an inaugural lap around the new facility.

EVERYONE IS INVITED. Light refreshments will be served after the program.

For the past 5 years, the High Sierra Striders, Mammoth’s local running club, has led the effort to bring a 9-lane, high-performance, all-weather polyurethane running track and top-notch synthetic turf infield (for football and soccer) to the communities of the Eastern Sierra. Construction of the project, managed by the Town of Mammoth Lakes, began on July 9 and will conclude this November. The new facility will be operated by the Town and will be open to all throughout the year as weather permits.

It will also be announced that the High Sierra Striders, a local organization promoting health and fitness through running for the past 7 years, is merging with the Mammoth Track Club, the professional running club that has produced numerous exceptional elite athletes who represent the US in the Olympics and other championships on the world stage. Operating under the Mammoth Track Club name, the newly merged organization’s goal is to create the ideal high-altitude training center in Mammoth Lakes while supporting athletic and academic achievement, developing athleticism and promoting health and fitness through running for athletes of all ages (youth through masters) and all abilities (recreational and elite).

Following this week’s ribbon-cutting, more construction will take place before full opening of the facility.

For the money they are planning to pay Ballas and his friends they could have built the Coloseum.

TOML clearly has some priority issues

I think this track is a complete waster of time and money. Once again we have built something for the running “visitors.” How many “locals” will be driving down to Whitmore on a daily basis to run on a track that will be covered with snow. I would prefer the… Read more »

or… how about opening a “track” that has already been built???
MAMMOTH MOTOCROSS TRACK.

A fantastic project, one that we can all be proud of!!!! This project was quietly getting planned, funded, and constructed, in an era of angst, anxiety and vitriolic toxicity in our local community. All the negative BS that’s gone on this past year – this is a nice respite. Who… Read more »

we can all be proud of? Try thinking critically Bill.
A nice respite? LOL!!! You’ve got to be kidding!

To the President Bush, funny, the words “thinking critically” and President Bush in the same posting. And to Mr. Warner, of course it’s easy to say the track should’ve been built at Cerro Coso – but was that even possible or feasible? Is there even suitable land out there? Private… Read more »

Consider the source
Reply to  Bill

Bill, You, too have noticed the non-stop negativity and unhappiness. This is what happens to people when they get their news and opinions from the likes of Rush Limbaugh 3 straight hours a day, 5 days a week and reruns on weekends. Same unhappy attitude from listening to “the only… Read more »

Tourbillon
Reply to  Consider the source

Dear Consider, perhaps you might remove your ideological blinders long enough to recognize that you are fomenting hate and divisiveness, i.e., that “non-stop negativity and unhappiness” you despise. It is possible for people to disagree with you politically and still want to move forward as a community. Look in the… Read more »

Neocons are Downers
Reply to  Consider the source

You got that RIGHT.
Today’s so-called Conservatives are downers.
Gloom-and Doomers to the max.
But the good news is, most of them are aging now, and sooner or later will die off leaving a more open-minded and liberal group for the future.

Why all the way out at Whitmore?…so we will build a new track field but close the shelter for animals out there…

Mono County has agreed to pay to keep the animal shelter open, even without Mammoth’s share of the payment.
BK

As a local, you would understand the lack of open space suitable for a track facility in the town of Mammoth Lakes…?

Yea!!! We built another facility and proceeded to engage in plans to fire the person left to maintain it! Yea!!! We used more taxpayer dollars to build sidewalks and have to keep them closed during the the months that travel is treacherous! Yea!!! We got a great trail system built… Read more »

A brief program will precede the ribbon-cutting event that will be followed by an inaugural lap around the new facility.

After the inaugural lap everyone was asked to leave, the gates were locked and the facility closed due to lack of funding