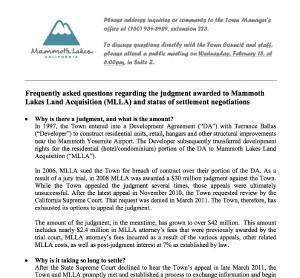 Town of Mammoth officials have released their own list of frequently asked questions, and answers, about the $42 million court judgment debt against town government.  More was expected at Wednesday night’s Town Council meeting with discussion of these issues slated for 6pm.

From what I see of this issue, it seems that the “carpet baggers” have come to town in ML and are stuffing the money bags and are going to cart it off. Some one invested in property, with idea of speculating on a big profit then when it all fell… Read more »

Well said, but who’s going to draw the line? The town leaders can barely hold a crayon.

LOL I know Ken I hear ya, but you know what i mean .. where does this sort of stuff end if everyone just lets it happen?

The ALPUN lists our population at over 13,000 people. I wonder if the rest of the document is similarly accurate. We have a little over 8,000 people living here.

What a bunch of hooowee!!!! The Town has never intended to pay on the judgement and is currently continuing to blow snow (considering the sze of the blizzard the mountain would be excited if it were real snow). If the town was serious they would not be continuing to operate… Read more »

As usual, this doesn’t answer ALL the questions: “The Developer subsequently transferred development rights for the residential (hotel/condominium) portion of the DA to Mammoth Lakes Land Acquisition (“MLLA”). In 2006, MLLA sued the Town for breach of contract over their portion of the DA.” Unanswered question: Why did they sue… Read more »

This letter sort of skips over 9 years of history which describes the real reasons behind the default on the DA. It also dodges the question: “What payment options is the Town considering? ” by not disclosing any of the offers it’s made to MLLA. More smoke and mirrors in… Read more »