Several hours after Mammoth Lakes' Town Manager Rob Clark presented a polite recap of all the issues the Town of Mammoth Lakes was facing with its budget, Finance Director Brad Koehn dropped the bomb that on top of what Clark had reviewed, the Town was now looking at another $555,000 budget shortfall. 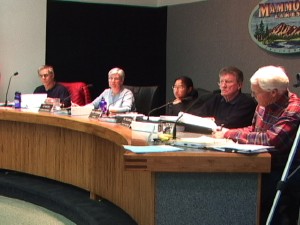 "The February TOT that we are just beginning to get in is showing that the March adjustments we made won't be enough to cover the shortfall that is coming," Koehn said.

Koehn went on to say that skier visits at Mammoth Mountain were down in March, which isn't a good indicator for the Town. At this time Mammoth is looking at a potential $351,000 shortfall in TOT for the remainder of the year, as well as a decline of $180,000 in building permits and a decline in business tax revenues, which creates the $555,000 deficit.

Several ideas to cover this shortfall, including not replenishing the Reserve for Economic Uncertainty (REU), were at first shot down by Councilman John Eastman.

"These are one time actions," Eastman stated. "We need to create stability," he added, citing the way Mammoth Mountain had gone about dealing with their budget deficit. They implemented one huge layoff, cutting enough employees to make sure the company would be stable for those who remained.

"The Mountain is facing the same thing we are and is not meeting their revised budget," Clark stated. "We are in a recession and no one can predict what is going to happen."

Jim Smith of Mammoth Mountain stated that while MMSA is meeting their percentages even with reduced revenue, April will not balance out the loss from March.

Koehn agreed. "Even a good April doesn't have the same punch as a good March because April typically runs about 35 percent of March," he said. On top of that, May and June round out the fiscal year as typically low TOT months.

After hearing all this, Council decided to approve the resolution to modify the operating budget by adjusting General Fund Budgeted Revenues and Fee Revenues; appropriating a self insurance reserve; not increasing the REU level, and dipping into department reserves.

Discussions on the fiscal year 2009/10 budget begin at the May 6 Council meeting.

We work to provide daily news to all of the Eastern Sierra, in the tradition of Eastern Sierra News Service and the Sierra Wave. We bring you daily happenings, local politics, crime, government dealings and fun stuff. Please contact us.
View all posts by News Staff →
Memorial Service for Andrea Lawrence
Lowest Bid Not Local Bid At Bishop City Council