By News Staff on February 23, 2012 in Government Agencies/Utilities 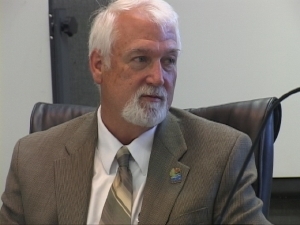 Forecasts for Town of Mammoth finances ride the same wave as weather forecasts – dry and partly cloudy.  Even as Mammoth Mountain’s CEO confirmed a revenue shortfall of 30% and pay cuts for workers, Town Manager Dave Wilbrecht also confirmed that he and others are watching developments carefully, know a revenue shortfall will come and don’t know yet how they will handle it.

Wilbrecht said officials now await transient occupancy tax figures for January, which they will have in March and February TOT which will come out in April.  As a major revenue stream for Mammoth, TOT is expected to drop considerably.  Mammoth Chamber President, Brent Truax of Westin Monache, predicted TOT would drop by $1.2 to $3 million. Wilbrecht confirmed a shortfall but could not say how much yet.

Property tax revenues, the Town Manager said, will go down next fiscal year and expenditures, he said, will go up.  He said the Town is looking at increases in employee benefit costs, and fuel costs. Wilbrecht also confirmed that CalPERS also announced the cost of retirement will go up 5 to 6%.  “We’ll determine our shortfall,” said Wilbrecht, “and then decide how to finalize a plan.”

Wilbrecht said the Town will have to make decisions about levels of service.  He also said he met with employees this week to give them a heads up of shortfalls to come but a need to maintain services.  Wilbrecht said, “We’ll get the facts first as close as we can and then go to employees.”  Cuts for Town employees may be as likely as they were for Mammoth Mountain workers.  Wilbrecht did say that Town government will likely look at a combination of solutions.  “Employees,” he said, “have to want to negotiate.”

Meanwhile, no progress on debt negotiations with Mammoth Lakes Land Acquisition. The Town will have to respond to MLLA’s court petition to collect its $42 million debt.  Wilbrecht said a hearing is scheduled for early March.  He said Mammoth still wants to negotiate or mediate a solution with MLLA.

Hypocrisy exists at all levels of government – unfortunately you either have to accept it or if you are an honest person, leave otherwise it will “slowly kill you from the inside out…” Oh, here is one idea for our hypocritical Town Council to save money – forgo your full… Read more »

Home girl- Does that mean you think it is o.k. to address this with the media first?

Nope, and that wasn’t my intent I was simply saying that it is awesome to give people the benefit of the doubt but more than likely they were right. If I wanted to bring it out in the media I would call Bennet

Trouble
Thats the only way these things get addressed, the slugs in power aren’t going to do anything to hurt themselves. If Home girl and HH don’t like it, management will see they are punished if they complain, and nothing will happen to the privileged.

HH, Just a little reminder. We all work together and we all feel the stress of whats going on, but its not cool to bash your co-workers like that. we’re getting beat up bad enough by the public, we don’t need if from co-workers.

Tru dat! Just like I said above, its bad enough many in the community are hating on us….we don’t need to start on each other too.

Rob, of course we want the truth and to find an end of all this mess….I realize that the Town created this mess, and it sucks.,…but the majority of us obviously were not involved in this whole deal and there is not one person that I interact with on a… Read more »

HH-talk about throwing someone under the bus. Ever think maybe the guy is on salary and works ten hours a day even with long lunches. I don’t really know, but I think your comments are really unfair if you don’t have all the facts.The only thing I think you proved… Read more »

Trouble, it is nice to try and give someone the benefit of the doubt but unfortunately HH is more than likely correct. The person I work for comes in between 9 and 11 leaves around 3 gets a cushy salary and a vehicle. In the month of sept. This guy… Read more »

You know times are getting stressful when the Government employees Turn on themselves.

“Our Government has gone wild”

It also gauls me that I see that assistant airport guy show up in a Town truck almost every day BEFORE noon, park in front of struggling businesses, and take his wife (who also works for the Town) to lunch. and then leave much AFTER one. So, not only is… Read more »

Correct me if I am wrong. When the town started it was to have between 8-16 employees… What Happened?..

The BIG Government scam has come to Mammoth Lakes.
Now there are approx 90 employees.

so much of that is hogwash and I completely agree with disgusted. With the very little snow this year the plow operators aren’t working nearly as much overtime as in years past = savings. If the plows aren’t running as much there is reduced operational and maintenance costs = savings.… Read more »

See you at the next town council meeting to bring up your points with the TC.

The town government should take at least a 30% paycut like everyone else seems to get.

Yes they should, it is only fair, but fair is not how they play. Same thing happening in the county. Cuts to employees pay, their benefits and double the workload. While upper management and the Board get high juicy salaries and vehicles that WE PAY FOR. Without the workers, who… Read more »

Just so you know, the employee(s) you are talking about also carpool together from Benton, arrive early, he gets picked up by another airport employee and goes to work. Yes he comes up at lunch to enjoy it with his wife, but is also picking up mail and other stuff… Read more »

Sorry the above reply was for HH and the airport worker comment. Andrew, Homegirl, now I am not an expert……just a Worker Bee, but we have faced cuts, furloughs, no raises, increased workloads, and stress. In the last 7-8 years my department had been merged with another one, moved in… Read more »

It’s déjà vu all over again, as the Town faces more financial problems in the face of this season’s drought and its latest over-paid public relations front man echoes the tired warnings of his predecessors. “Employees,” Wilbrecht said, “have to want to negotiate.” Well, how about the Town’s highest paid,… Read more »

Thank you for being Awake to the scam they call Big Government.
\
GGW

Maybe Mammoth should follow the Dodgers owner into bankruptcies. Yell I’m broke one day and make a billion the next. I’ll call Donald Trump for more advise.

The good news? You’ll be able to pick up a condo for the price of a used car! Sweet!

Sprinkle a few of these around the mountain —

And one from the Lakes basin down…

Never happen here Too Much Liability

From the lakes basin down — seriously — that’s a great idea! I could imagine it looping around Lake Mary and then down around the Twin Lakes cirque and then down over the cascade all the way to the Village. It would be World Class — as they like to… Read more »

Ken…PLEASE DON’T suggest this at the next Town/Mountain Council meeting…this is the very essence of a “politically correct” project to spend cash on……..

Ken…I can see it now…one of these… in Mammoth Lakes..I can only imagine the local …..ya know what,never mind.

Note the smug look of satisfaction on Wilbrechts face – he’s one of the only people making money off of this deal. The longer it drags on the more he makes and the closer he gets to collecting retirement.

@P&B
Sure glad to see that there are some people AWAKE to what is happening .

See what happens when you mess with Mother Nature….

Spend spend spend and when you are done Spend some more.

Rock of Ages
Reply to  upthecreek

“Stockton, CA to Take Steps Toward Bankruptcy, Next Week,” City Manager Says Pension promises made to city workers are “similar to a Ponzi scheme,” Deis said at Stockton’s City Hall. He said the city has a $450 million unfunded liability for retirement costs. Maybe Mammoth can get a 2 4… Read more »