By News Staff on August 8, 2011 in Government Agencies/Utilities

With the heavy, dark cloud of the more than $40 million debt that hangs over the Town of Mammoth Lakes, officials focused on smaller issues at their meeting last week. 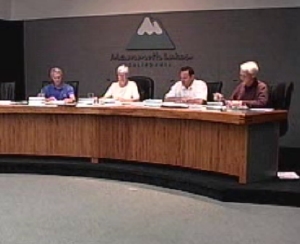 The Town’s new logo, described as mountains with snow and a smurf-like mountain, appeared behind the Town Council on the wall.  Tourism
Director John Urdi told the Council that the re-branding of the Town with the new logo will continue with new signs, and 100,000 new stickers. He said Mammoth residents will receive stickers in the mail – a special deal for locals.

In other matters, Councilman John Eastman asked to agendize the possibility of an audit of the High Sierra Energy Foundation since the town has given the organization funds over time. The resignation of the foundation’s 5-member board is believed to have contributed to Eastman’s request.

Eastman also complained about smoke in Mammoth Lakes from the Lion Fire, left to reduce fuels in the Sequoia National Forest. “It’s a good thing in theory,” he said, “but the consequences are a fire around 20,000 acres which is ten times the size of Mammoth Lakes.”  Eastman said the cost to let fuels burn will rise into the hundreds of thousands.  He also complained about protections for habitat of the spotted owls and frogs in the course of handling the Lion Fire.

Councilman Rick Wood said he was among dozens recreating on Lake Mary when Wildlife specialist Steve Searles and Police Officer Jesse Gorham responded to a bear call.  Wood and many others watched as the two managed a mother bear and two cubs.  Wood said one person asked him if that were the Bear Whisperer at work.  Wood called it a “priceless experience” for visitors.

On the issue of bears, Police Chief Dan Watson said that overall bears are behaving well.  As for the human side, Chief Watson said he awaits a meeting soon with the Forest Supervisor and others over the issue of Searles’ use of non-lethal weapons for bear control on forest land.

The Council will show up for a special meeting in Suite Z Wednesday at 6 pm.  Among other things, they will decide on elimination of developer impact fees on smaller projects for one year.

Pathetic. But personally, I welcome the eventual downfall of the town, it’s council, corrupt and overpaid cops, and the eventual exodus of the fair-weather, SoCal wannabe snobs that have invaded this village for the last twenty years. As Travis Bickle said, “Someday a real rain will come and wash all… Read more »

Obviously not to many people, including us locals, like the new brand. The stickers went directly into the recycle bin at the post office. They are not worthy of my car! It is a great example of our so called Government wasting money we simply do not have. The old… Read more »

maybe the MMSA should paint the snow Blue and start a “Smurf camp adventure land”.

SMURFS ARE IN FOR A FEW MORE MONTHS

Does this make John Urdi, executive director of Mammoth Lakes Tourism and head cheerleader for the new branding…Papa Smurf?

No wonder the town’s broke, reality is not necessary to be on the town council. They continue to rely only on the ignorant emotions of others through their own arrogance, to promote their agenda no matter how much money the town doesn’t have. Although the statement doesn’t “cost” anything except… Read more »

I received my stickers in the mail last week…..they went right into the into the “mixed paper” can at the Post Office…..after a good laugh, of course. What a waste of $$!!

We had to get the new brand because the Smurf Cartel was extremely persuasive. They made us an offer we couldn’t smurfing refuse.

smurf u and the smurf board u rode in on

I dont understand why they didnt have the kids at the college design the logo in a contest..Imagine having that on your resume.
Instead the town has a logo that looked like it was designed on the 4th floor of MMSA
yecccchhh

I am sure the 100k we have wasted on the logo will bring in lot’s of visitors… ROFLOL NOT!

PS why do we hire people who know nothing about Mammoth?

“rebranding” ? was something wrong w/ the “old” mammoth ?

“He said Mammoth residents will receive stickers in the mail – a special deal for locals.”

Good, I’m nearly out of toilet paper… is it squeezably soft?

But seriously — is there something in the water?

LOL Give me a break
This is advertising???
another closed session for the advertising budget

100,000 STICKERS AT APPROX 15-20 CENTS EACH
PLUS THE POSTAGE/ENVELOPES TO MAIL THEM OUT