The Mono County Grand Jury investigated the Mammoth Police Department, the Wildlife issue and other government functions. Now, the Town Council will respond to Jury recommendations – from police department behavior to the wildlife officer contract. 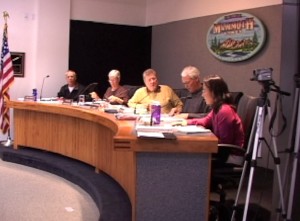 A letter from Town Manager Rob Clark will go to the Town Council tomorrow night for their consideration. The letter lines out complaints and recommendations from the Grand Jury and whether or not the Town has or will comply.

After hearing complaints and testimony on the situation with Steve Searles, the Jury recommended a formal contract. The Town letter points out that the Council did approve a contract that is subject to annual review. Allegations had come to the Jury that Searles personnel files were found outside of town offices. The Town letter says all Town files will be kept in the Town offices and Mammoth Police “have been advised to review their files.”

The Jury had recommended releasing a summary of conclusions from the investigation paid for by the Town into matters involving Searles and the police chief. The Town letter says the Town can’t violate confidentiality of witnesses who were part of this investigation.

Under the topic of numerous complaints about the police chief and his management style, the Grand Jury recommended that in the future recruitment for police chief should include internal and external candidates. The Town says they will do that when there is a vacancy.

Town officials say they have also taken into consideration the Jury suggestion to properly train officers working on special assignment. With concerns about fairness in promotions within the police department, the Town agreed to include input from the police officers association and an oral interview as part of the promotion process.

The Town Council will consider this letter when they meet Wednesday night.

We work to provide daily news to all of the Eastern Sierra, in the tradition of Eastern Sierra News Service and the Sierra Wave. We bring you daily happenings, local politics, crime, government dealings and fun stuff. Please contact us.
View all posts by News Staff →
Pursuit Through Inyo and Mono Ends in Three Arrests
Backpackers Stranded By Storm in Red’s Meadow