The Bishop Creek Water Association approved tougher standards for new and existing ponds at its Tuesday meeting. Faced with an historically low 4 percent snow pack in the Eastern Sierra and 36 percent run-off, assuming precipitation in the next six months is normal, the association approved the recommendations to help deliver what little water is anticipated in the Bishop Creek drainage to its members. 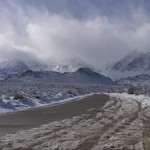 The amendments to the association’s by-laws include approval of all new ponds by the board; new ponds must be no more than five-feet deep, lined with an impermeable barrier and have a bypass capable of carrying the full flow of the feeding ditch when ponds need to be shut off. The above by-law amendments apply to existing ponds when they are drained or being cleaned.

The board will have to rely on cooperation among its 958 members. Utility districts supplying potable water can enforce regulations, can fine and be fined under California’s drought regulations, but not a ditch system association. However, Steve Stevens, board president, said the recommendations give the board “some teeth.” “If we adopt these amendments, it’s a start,” he said.

“We depend on people cooperating,” said board member Rock Baker. “We need you guys’ help and cooperation.” He pointed out that some association ponds take a day to fill which means that no water gets downstream until the pond has reached capacity.

The association has been working on a rotation system to delivery water equitably to the residential areas both north and south of Line Street. “The rotation isn’t working well,” admitted water master Clay Boyd, explaining that the water often doesn’t reach the last homes at the bottom of the ditch system. “If residents could wait until the water reaches the bottom before they start irrigating” that would help, he said.

The approximately 50 association members present at the meeting approved the changes. The only real question was the procedure. Gene Coufal, a consultant on the board, explained that the association operates under its own by-laws not the Brown Act. The full membership had been advised of the amendments.

The drought has played a messy game of dominos since the fall of 2012, the second year of drought. With the reservoirs drained, the creeks dried up at the end of the summer; by winter shallow, residential wells ran dry. Many residents cleaned out their ditches and ponds, scraping away years of leaves and silt. Unfortunately the leaves and silt had an effect similar to the impermeable barriers now being suggested. The 2013 spring run-off sank like a rock, raising the water table at the west end of the residential areas flooding yards and homes. During the 2013-14 run-off year, the third year of drought, flows were reduced to help hold some water in Lake Sabrina with the hope that the drought would end. It didn’t.

Retired Southern California Edison staffer and BCWA consultant Burt Almond opened Tuesday’s meeting with the grim facts. “From April 1 to Sept. 30 last year, the average out of Plant 6 was 80 cubic feet per second,” Almond said. “This year, the average should be 50 cfs. We’ve never seen one like this. Both reservoirs are empty. We may see flows in June from 60-80 cfs, but by July, they will fall off,” he predicted.

Water wise truer words were never spoken. It looks like DWP runs the Bishop Creek Assoc. and what ever they say is the gospel. Get a independent professional to evaluate the water problems in the Owens Valley. Find out what the aquifer and ground water situation really is. It has… Read more »

Wells in west Bishop depend on permeable ponds to recharge, making ponds impermeable will hurt everyone and threaten wells.

Get some professional help that is not biased for DWP.

There was some discussion about ponds and their accumulated debris and clay. We were told that ponds that were acceptable and with such an accumulation were 20 % permeable . For the health of the water table it is important to have inflitration from the ditch system . They also… Read more »

Do these rules apply to ponds in McLaren, specifically Brookside? So I understand that ponds should not be mucked out? What about weed/grass removal that’s invading the ponds?