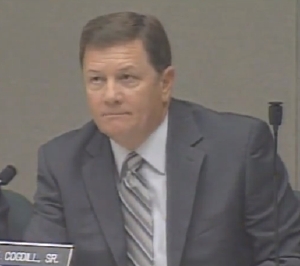 Senate Bill 1148, opposed by both Inyo and Mono Supervisors, will tentatively go to an Assembly Committee hearing next week. Former Mono Senator Dave Cogdill now pushes to defeat that bill which he told Sierra Wave Media would re-direct one-third of fishing license revenue away from hatchery and fish-plant activities. Cogdill said there is a good chance to defeat the bill with a growing coalition of opposition.

When he served as Mono County’s State Senator, Cogdill negotiated Assembly Bill 7 which devoted part of fishing license fee funds for the Hatchery and Inland Fishery fund. He said the Department of Fish and Game has failed to implement aspects of AB7 and that they see it as the “red-haired stepchild.”

Cogdill believes that if SB1148 passes, the Eastern Seirra will see “too few fish.” He also attacked a part of that bill which would form a five-member panel of scientists who he believes would spend a lot of money on studies and environmental issues.

The organization, CalTrout, headquartered in San Francisco, has spearheaded SB1148. The Eastern Sierra representative of CalTrout, Mark Drew, was not available for comment. We also could not reach CalTrout Director Jeff Thompson.

In a letter to an Assembly Committee, Cogdill said that CalTrout has “snubbed the partnership formed surrounding AB7 and now are attempting to rewrite the code created through that partnership.” SB1148 would re-direct fishing license fee money to wild and native trout programs focused on fly fishing not on put and take fishing supported by fish plants.

Cogdill said he is not against wild trout programs but does oppose “raiding hatchery money.” He did say that there is a good chance of defeating the bill. He said he and others are dealing with the powerful Latino caucus on this issue. Cogdill said, “This is about elitist fly fishing. The 99% are being ignored.”

Cogdill expressed concern for the economic impact of rural communities. He said the hatchery system and fish plants have “worked for 130 years. It’s one of the best administered programs when it comes for best bang for the buck. People are catching fish and they’re happy about it.”

[…] to the fact that California DFG is moving to sterile stocked trout almost across the board. Former Senator says SB1148 will mean “too few fish” I tend to agree with Tom Loe on his stances here…although we often do not agree. I'm pretty sure […]

ya no kidding. Talking with the younger college educated this has a good chance of passing just like many of the other invironmental bills in California. They’re excited about more money going towards studies. Which will further stifle the economy of the State. There’s not enough fishermen in Mono &… Read more »

Um, Trouble? I was making joke. I started fishing with my Grandpa in Rock Creek when I too young to hold a pole. We ate everything we caught and I’d still rather eat fish than any other food. Fishing is a vital part of the Eastern Sierra economy; go ahead… Read more »

Sasha, glad to know that. Thought you were nuts.

I don’t even fish but I think that everything should be done. More hatcheries breeding more fish. Fish that are stronger so they can live through catch and release. After the lakes are stocked up here, I see many dead fish that don’t survive the catch and release. Also, restore… Read more »

So how long before the Humane interests get the word that fish are being hauled out of the water, roughed up and then tossed back so it can be done multiple times to them again? Fish torture! that’s what it is! Catch and release must be stopped! No molestar a… Read more »

No molestar a los peces!

Can I get a bumper sticker please?

Sasha- if you save your protest for a endangered animal you might actually do some good. Trout are not endangered because of the money fisherman pay for all of our hatcheries. The more fisherman , the more trout.

So how long before the Humane interests get the word that fish are being hauled out of the water, roughed up and then tossed back so it can be done multiple times to them again?

I totally read that wrong too Sasha, I understand it in the light you presented it now, yes as soon as the humane folks get wind of it .. they will outlaw fishing all together because we are senselessly hurting and killing the fish.

I say we throw the Caltrout directors into their Frisco Bay.

I am both a “catch and eat” angler and an occasional “catch and release flyfishing elitist angler” Could you please explain the Latino angle once more?

Cogdill seemed to indicate that SB1148 gives to the elite and takes from the other “99%” which may very well include a fair number of Latinos. Also, the Latino Caucus is an organized, politically powerful group. Cogdill is organizing opposition.
Benett Kessler

Can anyone explain to me what an “elite” fishperson is? Has a butler put the worm on the hook? Drinks champagne instead of beer? Has a stretch float tube? Fishes in a gated lake?

Love your description. Plus, wears a beret and possibly an ascot. Seriously, those using such descriptions are apparently trying to distinguish between those who fish for rainbow and brown trout to take home and eat versus those who fly fish and frequently return the fish, native wild or otherwise, to… Read more »

A Elite fisherman is the guy with three sixty five thousand dollar boats sitting next to 4 frozen lakes most of the time . Oh wait, that’s our elite policemen. Never mind.

I wonder what his position is on the Senate Bill?

Tom Lowe is a good man who makes his living off stocked fish and fly fishing tours. I doubt he jumps into this debate. But I would bet he doesn’t want to see the hatcheries cut back.

They’re trying to reach the Latino people .. to tell them how the elitist are going to take away their ability … along with all of the other middle to low income people’s ability to go fishing, unless you catch and release, and are an elitist. Trying to get support… Read more »

Every year in January, I plunk down my money and buy my state fishing license. So let me get this straight….2/3 of the license money will still be going to the hatchery program and stocking fish. 1/3 of the money will go to developing wild trout stocks around the state.… Read more »

I believe the budget gives 1/3 to hatchery and fish programs and uses the other 2/3 for general fund and other expenses within DFG. We’re checking on all that right now with Sacramento. It is the same money now going to hatcheries and fishing programs that would shift – all… Read more »

Not all fly fishing anglers are elitist! We use barbless hooks so the next guy can catch the fish. Talk about saving money. I didn’t quite understand the Latino angle.??