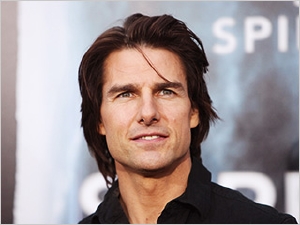 From Hollywood, the big newsmaker of the past week has now landed in June Lake.  Tom Cruise has captured headlines around his impending divorce from Katie Holmes.  As the couple reportedly settled amicably, Cruise went to work in June Lake in the film, “Oblivion.”

In May, word circulated that Cruise and possibly Morgan Freeman would travel to June Lake for filming in the latest movie from Director Joseph Kosinski, who is best known for “Tron: Legacy”.  Sources had said a fairly large crew would set up in June Lake with possible shots in other areas of Mono County.

The story line of the science fiction movie, “Oblivion” involves the destruction of Earth and a society that moves to the clouds.  Cruise will play a soldier who is stuck alone on the planet, repairing the drones that patrol and destroy a savage alien life form.  He encounters a beautiful woman who crashes in a craft and, according to film buffs, their experience together forces him to question his world view.

Disney originally bought the story, but worked a deal with Director Kosinski. According to some reports, the film crew had traveled from New Orleans to Iceland for a shoot before coming to the Eastern Sierra.  The release date of “Oblivion” has been reported as late April, 2013.

Wayne- I don’t want his money, I want his ex.

When I think of Tom Cruise maybe visiting Mammoth Lakes,why can I envision random residents coming up and asking him for money…..or asking him to help bail the town out of it’s economic catastrophe ?

Maybe Rusty can give marriage advise to Tom .

Maybe June can find Hollywood backers to build a studio/soundstage for interior shots.
Park City is building one.

esfotoguy
Reply to  Hooray for Hollywood

Maybe after Katie gets done remming Tom, he may want to open up a Monestry at June lakes ski resort, it would bring more people and money than a ski run.

June needs the revenue and so does Mammoth. Perhaps it’s time we leverage our unparallelled vistas and terrain, working to attract more major productions. 2 minutes on film generally equates to several days of filming. Make our area “production friendly” and we’ll all benefit.

Look, best I can say is the whole industry with skiing needs to quit overpricing itself! 10,000 dollars for a Black pass @ Mammoth, seems extreme! But for Mammoth, any time to say the “Rock” in “scorpian King” or to say Tom Cruise filmed in Mammoth is also extreme! Know… Read more »

The headline of this story concerns me as I was just fishing June Lake and was wondering where in the lake Tom was? Is he a bottom dweller, floater or only seen at night? I hope I don’t snag him while trolling….

My guess is a bottom dweller. I would suggest catch and release…..

We would invite you all back, but a jerk named Rusty closed us down.