By Charles James on May 8, 2020 in News Releases, Press Release 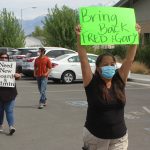 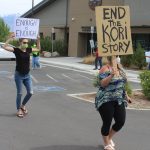 There have been a series of protests in front of the Toiyabe Indian Health Clinic protesting the actions of the Project’s CEO and Board for actions taken against two of four pharmacists, Fred DiRisio and his brother, Gary DiRisio, for allegedly serious “irregularities” found during an 2017-2018 audit of the Pharmacy, according to CEO Kori Novak. Charges have been made by the former employees claiming a lack of “due process,” a familiar charge made against Toiyabe in past situations that have rocked the Project.

The two remaining pharmacists, Jeff Tatum and Natalie Chang, would later walk out in sympathy with the suspended pharmacists, claiming the DiRisios were treated “unfairly.”

Charges and counter-charges have been made. Lengthy statements and accusations have been made by both sides in local newspapers, The Sheet (May 2, 2020 Edition, page 6) and The Inyo Register on Tuesday, April 28 with a statement from TIHP management, and then on Thursday, April 30 2020, a response from four former pharmacists and three pharmacy technicians, alleging the TIHP management team of corruption and illegal acts. One charge is that the administrators have been posing as pharmacists and pharmacist technicians in order to access private patient information, and in the process, committing numerous violations of HIPAA regulations, a charge which the Administration has vehemently denied.

Following is a statement issued from the Chairman of the Toiyabe Board of Directors, George Gholson: