JonPaul “Toby” Flanagan of Bishop CA was welcomed into the kingdom of Heaven on January 25, 2016 following a three-year battle with cancer; he was 76 years old. Born in Honolulu, HI June 28, 1939, to Jim and Irene Flanagan, the family moved to Vista in 1944. 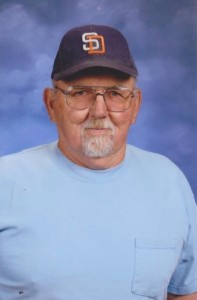 Toby attended Vista High School where he excelled in sports. He lettered in track and basketball and was a football standout making the varsity squad his sophomore year (1954). Toby was chosen Avocado League Player of the Year in 1956 by the Breitbard Foundation and honored as Athlete of the year 1956-1957 upon high school graduation.

He attended Palomar Junior College in San Marcos where his athletic achievements continued. He scored 32 points in the first half of the 1958 game vs Santa Barbara City College setting a single game school record for most touchdowns scored, most interception returns for touchdowns and most points scored.

Those records remain unbroken. As a Palomar Comet, Toby was named South Central Conference Scoring Champion in 1958, a first for the school. He went on to be named Player of the Year in 1958 and 1959.

In 1961 Toby met Patricia Fleeup. They were married in 1962 and welcomed three children into their family.

Toby was Delivery Manager for Drue’s Appliance in Vista from 1964-1989, followed by 10 years transporting disabled veterans to the VA Hospital in La Jolla, CA.

In 1999 Toby and Pat moved to Bishop. He worked in Maintenance at both Round Valley School and the Bishop Elementary Schools, retiring in 2009.

Toby volunteered at the Methodist Church Soup Kitchen. Always happy to lend a hand to friends and neighbors, he will be remembered by many as the kindest soul they ever met.

Rosary will be Friday, February 5 at 6pm followed by a Funeral Mass February 6 at 10:30 am at Our Lady of Perpetual Help Catholic Church with Father John Gracey officiating. A reception will follow in the parish hall where all are welcome to attend and celebrate Toby’s life.