A Time Magazine article in February explored longevity. The Long Life Family Study was quoted. A study sponsored by the National Institute on Aging with investigators from four U.S. research centers and one Danish one. Their goal – to figure out 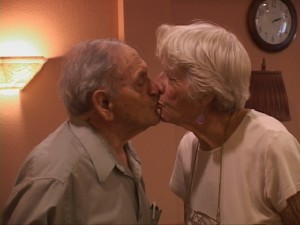 which genetic, environmental and behavioral factors contribute to a long life.

Mr. James Hurlburt and his seven brothers and sisters were featured. Hurlburt now lives in Sterling Heights assisted living center in Bishop. We chatted with him over what he thinks it is that has made it possible for him, at 92, and his brothers and sisters, in their late 80s and 90s, to have lived so long. They’re happy, said Hurlburt, and they love and support each other and always have. Hurlburt read over his family’s birthday cards sent to him earlier this month.

Time Magazine writers say there is a new group of centenarians who are mentally alert, relatively free of disability and remain active. They call it a new model of aging. The New England Centenarian Study, according to Time, finds that not smoking, being extroverted and easygoing and staying lean count for long life.

Researchers say about 30% of aging is genetic. James Hurlburt says he exercises every day, doesn’t drink and smoke, and he writes poetry. Many of his brothers and sisters engage in artistic work. James was a metal worker in the Navy and out, worked for a school district in San Diego. When his wife died last year, his two sons in Mammoth Lakes suggested he move to the mountains. 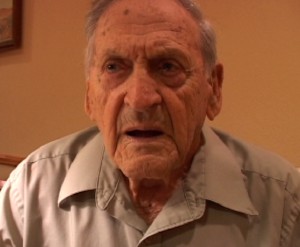 Hurlburt is a lifelong Roman Catholic with a deep sense of religion.

Hurlburt found a deep sense of religion early on that guides him daily to appreciate life. He has many stories of war experiences and life experiences – the Depression and family happiness. I asked him for his best advice to us for a long life. He said, “Truthfully, life is a place where we stay for many years, or sometimes a few years, but we have a place that we’re going to. And we don’t know what it is. We don’t know what life is all about and why we’re here. But the main thing,” he said, “if we do what God wants us to, or what we think he does, and we try to follow that, I think that helps our life very much. I know I always try to think of the best things in life and what to do. Of course, sometimes we fail, but the main thing is always look to Him and hope to go into the life afterwards that will be worthwhile. There’s no way we know, as human beings, that it’s true, but we have to hope for it and have faith and live that way if we can.”

Hurlburt has found another reason to live – his good friend, Bonnie Hollis. They met at Sterling Heights and give each other daily communication, trips and support. If it weren’t for Bonnie, James said he would probably move back East.

We work to provide daily news to all of the Eastern Sierra, in the tradition of Eastern Sierra News Service and the Sierra Wave. We bring you daily happenings, local politics, crime, government dealings and fun stuff. Please contact us.
View all posts by News Staff →
The Last Graduation for Eastern Sierra Academy
Whooping Cough on the Rise