By News Staff on November 9, 2012 in Government Agencies/Utilities 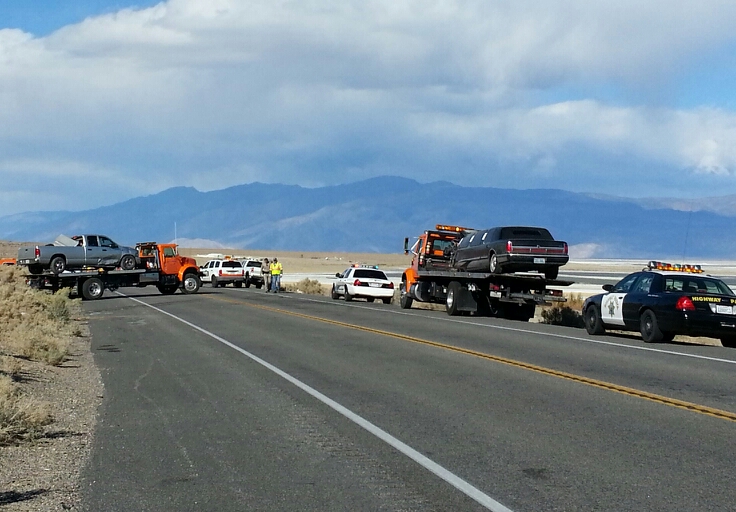 This afternoon (Friday) at about 1pm, three vehicles collided south of Lone Pine in an area called Lone Willow Dip by the Owens Dry Lake.  The California Highway Patrol had some information.  Officer Dennis Cleland said that a limousine and two pick-up trucks were involved. 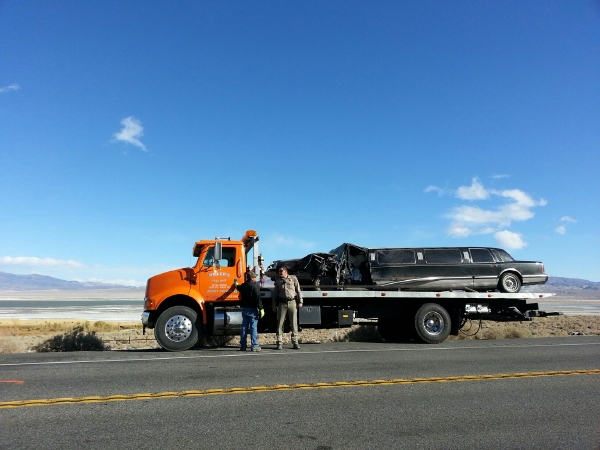 Cleland reported that the driver of the limo was at fault and had hit a pick-up head on.  The other pick-up side-swiped one of the wrecked vehicles, he said.

Officer Cleland said there were multiple injuries and that parties in the limousine were not wearing seat belts.  He said this led to major injuries. The officer said that eight victims were transported to Southern Inyo Hospital – 4 with major injuries, 1 with moderate injuries and the rest with minor injuries.  Some were expected to be transported to other medical facilities. The accident remains under investigation by the CHP.

My dad was the one in the truck that was hit head on. A phone call I will never forget. He’s still in the hospital in Reno. Every time I drive this stretch of 395 I am paranoid of morons passing in the double yellow as I see it all… Read more »

For the injured the Olancha Cartago by pass did not happen fast enough. Instead they get to be part of a long list of injured and killed from this stretch of road. I am thinking we quit calling it a “by pass” and start calling it a “business loop” for… Read more »

Steve I like your idea of calling it a business loop. Good positive twist for sure! on another note: Roads don’t kill people, unsafe drivers kill people. Four lanes didn’t help with the accident South of Bishop. Trucker STP is right, the different speed limit for trucks and trailers probably… Read more »

That area is very bad. I drive a tanker loaded with fuel and get passed there all the time I can’t see cars coming so I know they can’t. Having two speed limits for cars and trucks is unsafe also take a ride in a truck and see what it’s… Read more »

big al. the stretch of road that i was thinking about that ends in a blind corner isn’t the four lane passing lane that goes up the north hill of willow dip, but the stretch of highway north of cartago and south of willow dip where theres a passing zone,… Read more »

I screwed that narration up: It should be .. As you leave Cartego you round a right hand curve, there is no passing either direction until you exit that curve. southbound passing ends about 600 ft. north of this curve. Northbound passing begins about 2700ft. south of the next curve,… Read more »

Shoul be double yellow all the way!

More proof that Caltrans needs to hurry up and build the 4-Lane project ASAP!

Please communicate that to BLM…they are delaying the project by not allowing Caltrans to do the ‘standard’ environmental studies that are required to get through the environmental process…they need to realize that just because they can throw their weight around like an 800lb gorilla, it doesn’t make it right. History… Read more »

This section called “Willow Dip” is part of the Olancha-Cartego by pass. A lot of people traveling northbound know that the short passing lane is coming up, so some take full advantage of it to pass as many vehicles as they can. Even though, they also know, that within 1… Read more »

it’s hard to figure how that limo driver survived? from th eextent of the damage visible —

I know that stretch of highway at willow dip, theres a short passing lane coming out of cartago that ends in a blind corner to the north, probably the worst stretch of two lane highway in the owens valley. I guess when caltrans builds the bypass highway around olancha they’ll… Read more »

No passing zone, people in a hurry to get to Mammoth, driver pressured by passengers, illegal lane change over a double yellow, NO seat belts (nobody wears seat belts in a limo), probably drinking = recipe for disaster. It is totally unbelievable that no one went to the morgue.

I was heading to Ridgecrest at the time of this accident…When the road opened to traffic,and seen two of the vehicles involved,it’s a wonder there weren’t multiple fatalities….MAJOR impact between the mini-truck and the Limo.What was amazing is about 3 miles South of the wreck,I was passed in the 55… Read more »

🙁 That was my dad that was hit head on. I haven’t been able to locate a pic of his truck yet and am just thankful he’s alive.

Jen me and my husband and son are the ones that where also involved. I have been wonderibg how the poor man was that was hit. It was your father? How is he. He has been in my thoughts. I wish we could know what the man was doing in… Read more »

How is he doing. We have really been concerned about him.