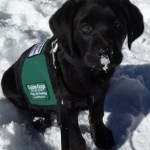 Black Labrador Retriever Remus is the most recent arrival. This eleven week old puppy is being raised by Anne Parkes of Mammoth Lakes, and is her third Guide Dog puppy. Remus has unusual and distinctive brindle markings on his legs, making him something of a novelty in the Guide Dog puppy world.

Yellow Labrador/Golden Retriever cross Eliza is being raised by Leigh Gaasch, also of Mammoth Lakes. Eliza is 13 weeks old, and is the fourth puppy Gaasch has raised. 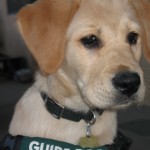 She is also the first Lab/Golden cross in the club, making her something of a novelty as well. 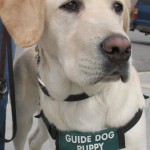 Seven month old Yellow Labrador Retriever Pilsner rounds out the puppy trio. He is being raised by Rick and Ramona Delmas of Bishop, and is their second Guide Dog puppy. Pilsner was “started” by Anne Parkes, and then transferred to the Delmas family is January.

Eastern Sierra Guide Puppies club meets regularly in Bishop, and takes the puppies on socialization outings all around the Eastern Sierra. Puppy raisers receive the pups when they are between 8 and 10 weeks of age, and raise them for approximately a year, at which time they return to the organization for their advanced training.

The club is always looking for new puppy raisers, puppy sitters and club volunteers. “Raising a Guide Dog puppy is such a fun and rewarding experience,” said club leader Betsy Thomsen. “You can actually make a wonderful difference in the life of a visually impaired person by being involved in our program.”

Puppy raisers teach their pups basic obedience, socialize them and train them to be good canine citizens by introducing them to new experiences.

The pups are returned to Guide Dogs for formal guidework training when they are 14-18 months old. Eiger, a pup raised in Bishop by Thomsen and her husband Peter, and Marion and Nona Davis, is currently in the final phase of his advanced training at the San Rafael, CA campus.

Following the completion of the training, the dogs are matched with their visually impaired partners. The new person-dog teams completes an intensive in-residence course culminating with a graduation ceremony at which the puppy raiser presents the dog to their new partner.

Guide Dogs for the Blind has been creating life-long partnerships by providing Guide Dogs free of charge to visually impaired individuals since 1942. The organization receives no government funding, but depends entirely on private donations.

For more information on the local puppy raising club, contact Betsy Thomsen at 760-920-8891 or [email protected]

Additional information on Guide Dogs for the Blind may be obtained by visiting www.guidedogs.com