By News Staff on July 22, 2014 in Government Agencies/Utilities

(Press releases – MCSO, Jennifer Hansen) On the evening of Friday, July 18, 2014, at approximately 9:00pm, Mono County Sheriff’s Dispatch received a call regarding a lost backpacker in the area of Cora Lake.

A 22-year-old backpacker was separated from his friends on the Pacific Crest Trail and became lost in the general area of Cora Lake, approximately 12 trail miles south of Hwy 108. The backpacker was able to send a text message to his parents requesting help. The Mono County Sheriff Search and Rescue (SAR) team responded to locate the lost backpacker.

Search teams reported to the area and were given assignments covering three routes toward Cora Lake. A California Highway Patrol (CHP) H40 helicopter, from Fresno, was requested to join the search. SAR team members received another text message from the backpacker with a more precise location. SAR team members communicated this information with the H40 helicopter to spot the backpacker from the air. In the rapidly deteriorating weather and increasing winds, the crew of the H40 helicopter located the backpacker, extricated him, and transported him to the Mammoth/Yosemite Airport in late afternoon of Saturday, July 19. The backpacker was uninjured and did not require medical attention.

SAR ground teams were in the field for 14 hours and logged over 120 hiking miles. 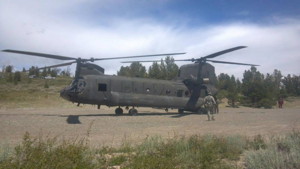 On the early morning of Sunday, July 20, 2014, at approximately midnight, Mono County Sheriff’s Dispatch received a call regarding two climbers that were stranded on Clyde Minaret.

Two climbers had begun a climb on Saturday, July 19, 2014, on Clyde Minaret, a popular peak located in the Minaret Range approximately 12 miles northwest of Mammoth Lakes. Due to the thunderstorms that occurred during the day, the climbers were unable to complete their climb before darkness fell and became stranded at 12,000 feet elevation. Due to hypothermia and dehydration, the climbers were unable to complete the climb and descent on Sunday morning. The Mono County Sheriff Search and Rescue (SAR) team was called to aid the two stranded climbers.

The SAR team was able to obtain the assistance of two helicopters, one from the California Highway Patrol (CHP) H40 based out of Fresno, and the other from the California National Guard based in Stockton. The CHP H40 helicopter crew was able to rescue on of the climbers, but due to the arrival of heavy rain and clouds, were unable to rescue to second climber. Two hours later, the rain cleared and the crew of the National Guard helicopter was able to retrieve the second climber. Both climbers were flown to the SAR team base at Minaret Vista just north of Mammoth Mountain. Neither climber required medical treatment after evaluation by the Mono County Paramedics. 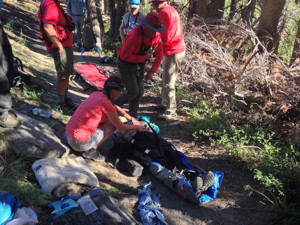 A multi-day guided pack trip was returning from their trip, when approximately 1.5 miles from the Agnew Meadows pack stations, two mules became spooked and the riders were thrown from the mules. The Mono County Sheriff Search and Rescue (SAR) team responded to aid the two injured riders. One rider suffered a bruised leg. The other rider sustained serious injuries. Eight SAR members hiked in and stabilized the seriously injured rider for evacuation to the trailhead via a wheeled litter. Mono County Paramedics met with SAR team members and the victim and transported them by ambulance to Mammoth Hospital for treatment.

We work to provide daily news to all of the Eastern Sierra, in the tradition of Eastern Sierra News Service and the Sierra Wave. We bring you daily happenings, local politics, crime, government dealings and fun stuff. Please contact us.
View all posts by News Staff →
Roads washed out by storms
Arizona woman and pet cat taken into custody